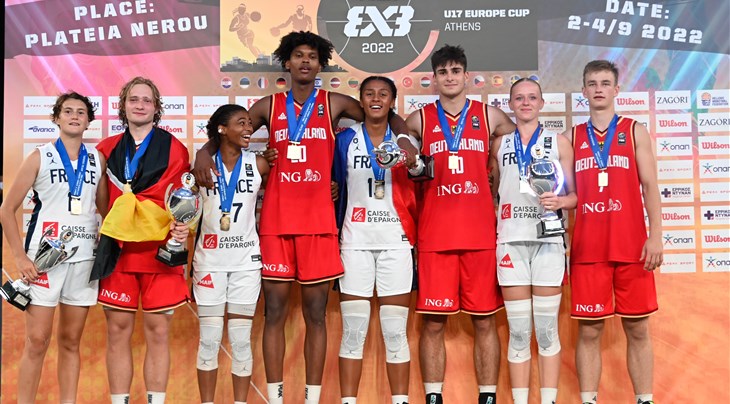 In the men's category, Germany won their first 3x3 U17 Europe Cup gold medal after defeating Latvia in a heart-breaking final (21-20). Tournament MVP Fabian Giessmann topped all scorers in Athens and also led the charge in the final with 8 points, including a thunderous baseline reverse dunk to seal the gold medal. Janis Censonis had 7 points for Latvia in the losing effort and joined Giessmann and Theo Pierre-Justin (who spearheaded France's bronze-medal campaign) on the Team of the Tournament.

On the women's side, the final was just as breathtaking. France held on to a 13-12 win against the defending champs Spain to win their first 3x3 U17 Europe Cup. No-look pass artist Lou Bobst was named MVP of the competition and was joined on the team of the tournament by top scorer Phoenix Stotijn, from the Netherlands, and second leading scorer Laia Conesa of Spain. The bronze-medal game was yet another one-point ball game and Poland won bronze in a 12-11 nail-biter against the Netherlands.