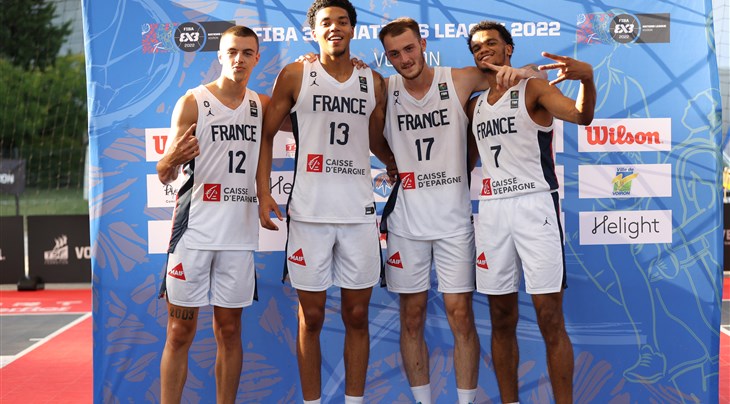 VOIRON (France) - France enjoyed the comforts of home with their men's and women's teams producing spectacular performances during the opening three stops of the FIBA 3x3 Nations League 2022 U21 Europe West Conference in Voiron.

In the men's, France started superbly as they made the final of Stop 1 with ease but were pushed all the way by Italy in a classic decider before prevailing 21-19.

Les Bleus though were stunned by Germany in an agonizing 16-15 defeat in the final of Stop 2 before bouncing back to claim Stop 3 with an easy victory over the Netherlands. France take a big lead ahead of the 3 final stops of a congested group headed by the Netherlands, whose strong finish powered them to second on the standings.

In the women's, France also enjoyed plenty of success with victories in the opening two stops before faltering in Stop 3, where they had a big loss to Italy.

But Italy couldn't quite capitalize as they fell short to Germany 21-18 in an entertaining decider.

Just look at what it means! 🤩
Germany are stop 3 winners after a nail-biting final against Italy! 🇩🇪🏆 #3x3NL pic.twitter.com/vHjGyuFXww

Even though they stuttered at the final hurdle, France can be well pleased and they sit 20 points clear of Germany, who improved at every stop to build momentum ahead of the final three stops next month.

Former U18 World Cup bronze medalist Lisa Dufon (France) won the scoring charts in the women's category with nearly half of her 49 points coming from outside the arc.