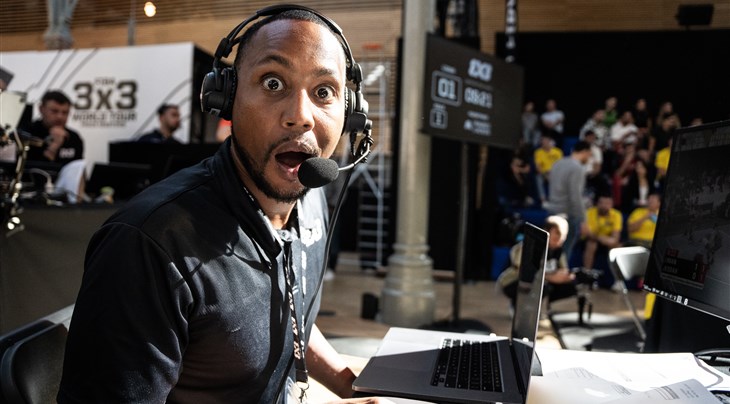 MIES (Switzerland) - Before the calendar flips over, it's a good chance to reflect on an absolutely crazy FIBA 3x3 World Tour 2022.

And who better to look back on this epic season than Kyle Montgomery aka 'The Voice' of 3x3, who dishes out his awards.

There were some absolutely ice cold assassins, but nobody was better with the game on the line than Riga's Nauris Miezis, who constantly performed superpowers in the clutch.

He hit numerous big shots with his best probably being his insane two-piece to take down Ub at the Riyadh Masters final.

"Riga is never out of the game as long as Nauris Miezis has the rock in his hands," Montgomery said. "There's nothing outside his range."

Montgomery wanted to select Utrecht's excitement machine Worthy de Jong, who lit a fuse under the World Tour with his outrageous tricks.

But he was swayed by Quincy Diggs' domination at the Abu Dhabi Final, where he helped lead Vienna into the final. In his debut season, the 6ft. 6in (1.98m) athletic beast averaged 5.3 ppg and established himself as an inside and outside threat.

"This dude is a star right before our eyes," Montgomery said. "This guy can take over the game. Watch out for him, he's going to be a problem in the future." This was another tough category but those who watched the Manila Masters know there really is only one choice.

It's Cebu Chooks' human highlight reel Mac Tallo, who produced the nastiest ankle break of the year that had the No.1 ranked player looking unusually foolish.

"He got that thing on a string. He made Strahinja Stojacic do the splits in Manila, one of the most vicious ever moves," Montgomery said. "You got to watch your ankles."

Montgomery was torn in this selection between Donkor and Ub's Nemanja Barac. He wanted to award a tie but we weren't going to let him off the hook so easily.

"Dennis the menace causes so many problems, he has so much energy," said Montgomery, giving the slight edge to Donkor who became a key part of Antwerp in the second half of the season.

"It's so difficult to get past him. the best perimeter defender this year." This was an easy choice. It just had to be Stefan Stojacic, who returned after a serious knee injury and wound back the clock to his Liman peak years.

Stojacic inspired Vienna to their first Masters title, where he scored an insane 50 points in Paris. He averaged a whopping 7.8 ppg on the World Tour to complete one of the most amazing comeback stories across sports.

"None of us knew if he would come back and also play at the level that he played this year," Montgomery said.

"Mr Robot has rebooted and looks as good as before he got injured. It's an inspiring story, like Derrick Rose in the NBA."

There were plenty of high-flyers who rattled the rims this season. But Washington DC's Keaton Wallace took out this title after catching numerous bodies and the attention of Montgomery.

"This dude is explosion personified. He's got ridiculous bounce and can dunk on almost anybody," Montgomery said.

'The Maestro' continued to have the shooter's touch as he drained the most two-pieces to help Ub become the best team of 2022. From beyond the arc, Majstorovic is still the player to most fear.

"He was composing twos all season long. His stroke is still strokin' at a high rate. For so long he's been the best shooter in the game," Montgomery said.

Who got next? Vienna

With Stefan Stojacic rebooted, an inspired Vienna made the jump this season and it wasn't a one man show with the Austrians also featuring new sensation Quincy Diggs and big fella Filip Kramer.

They achieved their World Tour breakout this year, but Montgomery believes 2023 could be even more fruitful.

"Vienna have come out of nowhere and Stefan Stojacic has changed the whole dynamic of Austrian 3x3," Montgomery said.

"I think Vienna will be a problem, I can see them winning two, three or maybe even more Masters next year."

There were no surprises from Montgomery, who selected No.1 ranked Strahinja Stojacic as the game's best player. After a trio of Masters MVPs and having led most of the major stats categories, it was 'Doctor Strange's' world in 2022.

"All you have to do is look at the numbers, and he passes the eye test too," Montgomery said. "He has taken his level to a different multiverse and was the center piece to Ub's success.

"He's the best player hands down."

At 6ft. 8in (2.03m) with Inspector Gadget arms, Augustijnen took to 3x3 like a duck to water and immediately became a key part of powerhouse Antwerp.

The 23-year-old has superstar written all over him, according to Montgomery.

"He's got great size, can stretch the floor...can drive, rebound, " Montgomery said. "He's a prototypical 3x3 player...not a liability defensively and can extend the floor.

Montgomery agonized between French superstar Laetitia Guapo and Michelle Plouffe, but in the end went for the Canadian.

The 30-year-old was the most reliable bucket getter around as she made the paint her personal playground to take the crown as best women's player alive.

"She is the most unstoppable player and can give it to you any way you like it...inside, outside or on defense. She's a problem," Montgomery said.