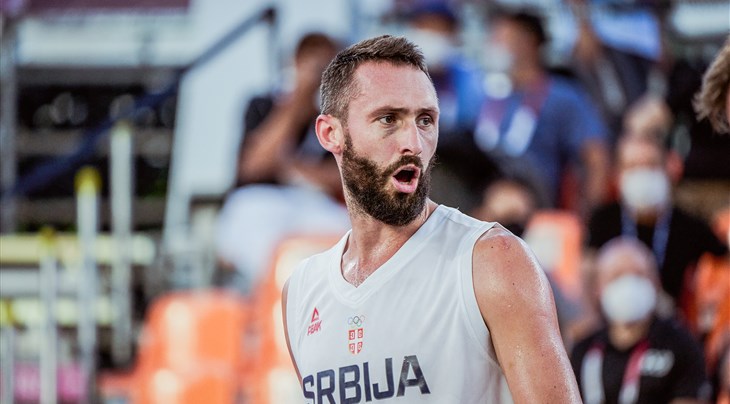 ANTWERP (Belgium) - Dejan Majstorovic is the last remaining link to powerhouse Serbia's dynasty but 'The Maestro' has unfinished business if he wants to enter the record books at the ongoing Crelan FIBA 3x3 World Cup 2022.

The legendary Serb is hoping to lead his country to a remarkable fifth title from just seven editions of 3x3's showpiece event. If the sharpshooter finds his radar then he might just be crowned a world champion for the fourth time having been a key part of Serbia's incredible three-peat from 2016-18.

Only his former Serbia and Novi Sad teammates Dusan Bulut and Marko Savic have won more with the iconic pair also claiming the title at FIBA 3x3 World Cup 2012.

Majstorovic is the only men's player in the draw in Antwerp to have won a World Cup as he leads a new-look Serbia, who boast Strahinja Stojacic and Marko Brankovic from 'The Maestro's' team Ub along with Liman big fella Mihailo Vasic.

The 34-year-old, who is arguably in career best form after powering Ub to the recent Manila Masters title with an MVP performance, understands the stakes in Antwerp.

"It's very important. I really want to have a legacy in 3x3 and be the guy who had the most trophies," Majstorovic said.

Ten years ago, as Serbia clinched the historic first ever 3x3 World Cup in Athens, Majstorovic was clueless about the feats of his compatriots.

"I had no clue about FIBA 3x3," he admitted. "I played 3x3 in Serbia but only knew about the World Cup when (the players from) Novi Sad said they were world champions."

The 6ft. 7in (2m) sniper soon caught the eye of the newly crowned champs when he became a big problem for them on the half court during local competitions in Serbia.

"I played against them four-five times and I beat them every time," Majstorovic said.

It led to Savic reaching out to this 3x3 standout, who had the sweetest stroke and seemingly unlimited range, before the Bucharest Challenger in 2013 but an injured Majstorovic was unavailable.

Serbia's top players were forced to look elsewhere but never forgot about Majstorovic and finally they teamed up at FIBA 3x3 World Cup 2014 in Moscow. Majstorovic was on his way to playing basketball in China before Bulut pleaded with him to join forces.

In his debut on the big stage, Majstorovic lived up to his popular nickname of 'The Maestro' with one of the sickest plays in World Cup history. In OT against Romania, Serbia had the ball and a chance to call game when the newcomer decided to make a statement.

Majstorovic unleashed the Shammgod - or Bodiroga move - and finished with the buzzer beater in the most outrageous play of his illustrious career.

" Nobody expected it. When I saw it on Instagram, I was happy," Majstorovic said.

He only tried the crazy move - which he had imitated from Serbian basketball legend Dejan Bodiroga - one more time but it did not end well. "I tried against Piran against Gasper Ovnik but it didn't work and that was enough," Majstorovic laughed.

But 'The Maestro' was not laughing when small gulf nation Qatar pulled off one of the greatest upsets in 3x3 history by beating hot favorites Serbia 18-13 in the final.

"We watched Qatar-Lithuania in the semis and cheered for Qatar," Majstorovic said. "But they had two big guys who stayed under the basket and they were bigger. 3x3 was played differently back then"

It left Majstorovic hurt and feeling like he had let down his teammates who had fallen short of back-to-back titles.

"In that moment, I was disappointed. It was only gold for me," he said. "For me, it was a bad tournament."

Majstorovic started feeling like maybe was a bad charm after Serbia failed to go all the way at FIBA 3x3 Europe Cup 2016, where they again fell short in the final. "People were saying I was the only one who didn't have gold," Majstrovic said.

Sick of finishing with silver, Majstorovic entered the FIBA 3x3 World Cup 2016 on a mission like the hot shot pilots in Top Gun: Maverick.

But, again, Majstorovic's bad luck continued when he was injured on tournament eve but he hobbled through the pain to help lead Serbia into the final against Team USA, who had lit up Guangzhou with a dunking exhibition.

Even though the Americans boasted human highlight reels Alfonzo McKinnie and Myke Henry, who both were NBA bound shortly after, Serbia wanted to make a statement that 3x3 was their turf.

"We watched Slovenia-USA in the semis and I cheered for USA because it is much different to beat USA in a World Cup final," Majstorovic said. "We felt confident and we knew we were going to win."

His confidence was vindicated but only after a fight to the death where USA brought all their tricks only for Serbia's chemistry and experience to prevail 21-16 in probably the greatest ever 3x3 game.

"We knew they couldn't defend our screens and passing," Majstorovic said. "It's one of my favourite tournaments, especially celebrating with the Serbian fans in the crowd."

The famous victory triggered a memorable run for Serbia, who claimed a three-peat of titles after wins in 2017 and 2018. In Nantes, Majstorovic was at his absolute peak and he ran away with the MVP after a ridiculous 60 points from 7 games.

One year later in Manila, Serbia's dominance was challenged but Majstorovic wouldn't let their quest for a three-peat end. In a tight semi-final against Poland, 'The Maestro' proved he should also be known as 'Mr Clutch' with a spectacular buzzer beater to break the hearts of the Poles.

In a re-match of the 2017 decider, Serbia again proved too good for the Netherlands to complete a feat that might not be replicated for some time to come. "It was amazing to win three in a row and we felt that no one could beat us forever," Majstorovic said.

But 3x3 was changing and the depth of talent started to sweep the world. That became obvious at FIBA 3x3 World Cup 2019, where the unthinkable happened.

The unbeatable Serbia missed the podium after losing to Latvia in the semis and then to Poland in the bronze medal game after Michael Hicks played one of the great individual games in 3x3 history.

"We didn't have energy and we played terribly (against Poland)," Majstorovic said. "It was painful to finish without a medal. It took one month to get over."

Three years later, Majstorovic finally gets his shot at redemption with his new-look team in an effort to put Serbia back where he thinks they belong - as champions of the world.

But he's not thinking about winning the gold medal or equalling records just yet.

"I really am trying not to think about that," Majstorovic said. "Everyone wants to beat us. I have a lot of motivation."