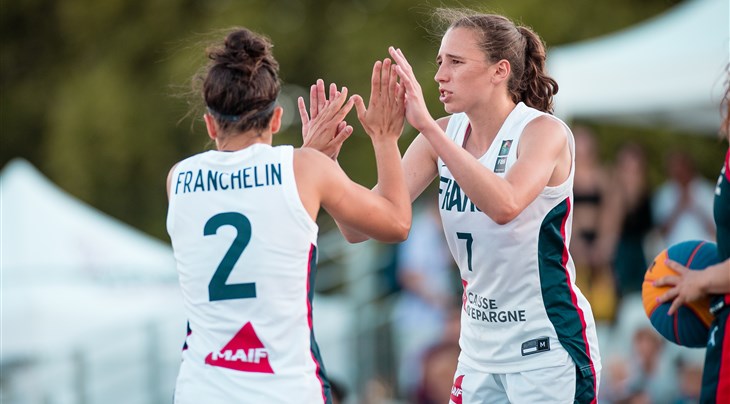 BUCHAREST (Romania) - Some of the best young stars will travel to the 3x3 mecca of Bucharest, Romania, for the much-anticipated FIBA 3x3 U23 World Cup 2022 on October 5-9.

The third edition of the yearly showpiece competition boasts 40 teams - 20 per gender - and will return for the first time since 2019 when Japan (women's) and Russia (men's) won the titles.

In the men's, Mongolia are the No.1 seed and headline Pool A featuring China, Latvia, Slovakia and Chile.

Mongolia boast a talented line-up with 3x3 fans no doubt familiar with big fella Altangerel Batsaikhan, who laces up for Zaisan MMC Energy on the pro circuit and he was also part of his country's squad at the event three years ago. China are led by talented 23-year-old Jianghe Chen, who lined up for world No.1 World Tour team Ub at the Ultra Novi Sad Challenger 2022.

No.2 seed Lithuania will be aiming to continue their strong year at the international level with a rich group of talent starting to make a name for themselves on the pro circuit such as Eimantas Zilius from Kaunas.

No.5 Japan might be their biggest threat in Pool B with dynamic Takumi Masuko showing off his skills at the FIBA 3x3 Nations League 2022. Host Romania, African powerhouse Egypt and Chinese Taipei round out a competitive group.

No.3 seed France are always formidable no matter the age level and they once again look like a contender. Lorenzo Thirouard-Samson is emerging as a new French star as he helped his country to glory at the Nations League 2022 (and was named MVP) and has also appeared on the pro circuit with Rouen.

The Netherlands, Ukraine and Brazil are the other teams in Pool C.

You've seen him dazzle at the Nations League 2022, now it's time to watch 20-year-old Shoham Gat do his thing at the U23 World Cup for Israel who head Pool D featuring Germany, 3x3 power Serbia, Qatar and Kazakhstan.

Shoham Gat is a wizard with the rock! 🤩🧙‍♂️ #3x3NL pic.twitter.com/B2qxQYu1yh

In the women's, France have top billing and it's not hard to understand why with top U23 player Camille Droguet a walking W having led her country to success at FIBA 3x3 Nations League Final 2022 (where she was named MVP), while she's lit up the FIBA 3x3 Women's Series 2022 for France U24.

France will be challenged early against host Romania whose fans will be hoping Teodora Manea makes a leap on the half-court. Egypt, Ukraine and Chile round out Pool A.

Pool B has a blockbuster clash between No.2 seed China and Lithuania in an early show of strength.

A dangerous China boast their latest sensation Mingling Chen who was part of her country's Women's Series victory in Sukhbaatar. Poland, Israel and Chinese Taipei will be keen to make it more than a two-horse race.

There is always one 'Group of Death' and Pool C might just be that with hoops power USA armed with a slew of WNBA players marked by 22-year-old Emily Engstler having gained invaluable experience on the half-court during this season's Women's Series.

The USA will have to contend with No.3 seed Mongolia who are led by Tokyo Olympics player and their star Khulan Onolbaatar with the Mongolians stealing the show three years ago and hoping to have an even deeper run this time.

Defending champs Japan will also likely make plenty of noise with players who shined at the Nations League 2022, while Dominican Republic and Uzbekistan can't be discounted.

No.4 seed Germany look tough to beat led by bucket getter and Women's Series star Emma Eichmeyer and there is a lot of interest in their clash with No.5 seed Netherlands who boast young gun Noortje Driessen, who won silver with the senior team at the Europe Cup last month.

Hungry, Austria and Sri Lanka will be hoping they can go on giant-killing runs.

The top two teams in each pool will qualify for the quarter-finals.