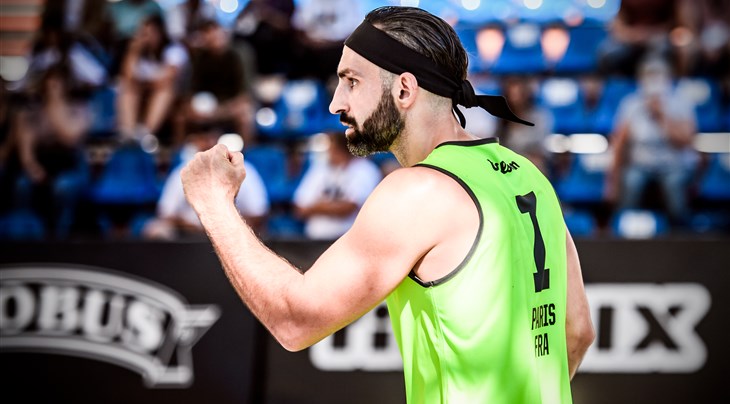 ATHENS (Greece) - During his spectacular 3x3 career, you could always count on two things from Angelo Tsagarakis every time he stepped on the court.

The man who played for France - but has both French and Greek citizenships - always packed a punch far bigger than his size through flair and passion to chalk up a highly decorated 3x3 career, which netted a bronze medal at the FIBA 3x3 World Cup 2017 and two shootout crowns for one of the OG snipers.

So expect Tsagarakis to impart the secrets of his success on his players as he takes the role of Greece 3x3 coach for their men's and women's national teams.

"If you knew me as a player, you can already anticipate that our teams are going to play with tremendous confidence and aggressiveness," he said. "Competitiveness was the essence of my playing style so my teams will always transpose that philosophy on the court.

"3x3 is about creativity and competitiveness, and if a player shows flair on the court it means that they are liberated and inspired. So I would definitely want that for my players."

Greece are a basketball powerhouse and have one the best players in the world in Giannis Antetokounmpo.

But 3x3 domination has been lacking and gone under the radar for too long in Greece. Until now.

"Greece has a fantastic basketball culture, so to become a powerhouse people need to approach 3x3 the way they have mastered basketball," Tsagarakis said. "We have the talent. We have great coaches. We have fantastic fans.

"All that’s been missing is the willingness to dive into 3x3 the way they dove into basketball back in the '80s."

But Greece have signalled their intent at climbing up the increasingly congested 3x3 ladder with the appointment of 37-year-old Tsagarakis, who will take on the part-time role but, of course, in his trademark style will be putting everything into it.

"I treat this role with a full-time interest and investment. When you care you don’t count," he said. "But in September we’ll sit down and discuss the future as the plan is to collaborate together for a long time."

Instead of just undergoing a quick fix, Tsagarakis hopes to put the building blocks in place for a sustained run of success for Greece.

"We are starting this whole program with a new ambition. But I was very clear with the federation right away, this is going to be a process," he said. "We may eventually overachieve but if we want to get to the top and last at the top we must change the culture in Greece.

"Wanting something is a start. Putting words into motion is another. So far, the walk is being walked."

He feels ready for the challenge having gained valuable coaching experience through being an ambassador and technical director of Dreals Paris, a company aiming at developing 3x3 in France and Africa.

Earlier in the month, Tsagarakis was in Benin helping out their 3x3 national teams and he had done something similar in Congo two years ago. He had also acted as a mentor for Filipino team Pasig Chooks after playing for them in 2019.

Tsagarakis gets to be involved in the country of his heritage as he eyes awakening a 3x3 sleeping giant.

"My heart, body and soul belong to both France and Greece," he said. "I’ve had the great honor to represent my motherly land (France) as a player for many years so to be offered now the opportunity to represent my fatherly land (Greece) as a coach, it’s definitely special and emotional for me."

If Tsagarakis can successfully impart his DNA on his players then Greece will be surely rising to 3x3 relevance sooner rather than later.