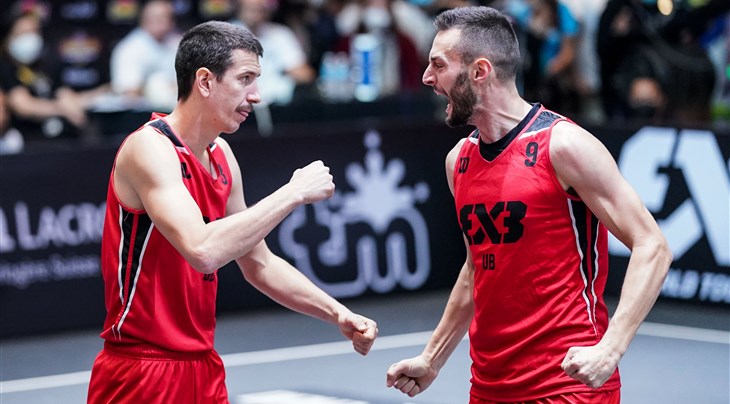 TAINAN CITY (Taiwan) - No.1 ranked Ub Huishan NE (SRB) dominated the first half of the FIBA 3x3 World Tour 2022 season before a recent mini slump, which they hope to end at the Tainan City Challenger on October 22-23.

It won't be easy with six of the top ranked 12 teams in the world in the 16-team draw, as the fight heats up for two tickets for next month's Hong Kong Masters.

They may have not collected win after win recently, but we just have to start with Ub who once again boast their awesome foursome led by No.1 ranked Strahinja Stojacic and partner-in-crime Dejan Majstorovic.

Ever since their incredible hot streak ended to Antwerp (BEL) at the Debrecen Masters, Ub fell in the quarters in Paris before a semi-final exit at last week's Sacheon Challenger. Both losses were to rising power Vienna (AUT), who aren't in this draw, but Ub haven't quite looked as indestructible as their unstoppable start to the season when they were stronger than Black Adam.

Their biggest challenger will probably be No.4 ranked Antwerp with the teams potentially renewing a rivalry that went into overdrive in Debrecen. Ever since their breakthrough Masters victory, the brilliant Belgians have been a bit hot and cold but they found form in Cebu with a runner-up finish.

Superstar Thibaut Vervoort aka 'Must See TV' returned to the top of the ratings, but perhaps most pleasingly was the performance of newcomer Dennis Donkor, whose shooting skills and athleticism made him a two-way threat.

The top two seeds are the standouts but Sakiai Gulbele (LTU) deserve to be in this tier after a strong season, where they've won two Challengers and made the final four of their last two Masters.

Aurelijus Pukelis and Marijus Uzupis might be the most underrated duo on the pro circuit with the tandem averaging a combined 12ppg on the World Tour.

If they light up Tainan City then the lethal Lithuanians have every chance of winning a third Challenger title in 2022.

It's a loaded draw and No.4 seed Ulaanbaatar MMC Energy (MGL) have every right to get angry at us for not including them above. But for all their competitiveness and miles of travel, they still don't have a title to show despite coming close numerous times, including recently in Cebu where they made the semis.

They will be hungry to open their account and if sniper Steve Sir finds his radar then Ulaanbaatar might finally get their silverware.

Each of them boast superstars and will be eyeing the tickets available for Hong Kong, as they look to rack up points to qualify for the season finale.

There are a couple of obvious dark horses in the draw. Utsunomiya BREX (JPN) made the quarters in Cebu and Sacheon to underline their solid form and they always create headaches for opponents through speedy Yosuke Saito.

But the Japanese team will most likely have to battle with the always entertaining Cebu Chooks to emerge from Pool A headed by Ub. The Filipinos are still trying to land a blow this season, but are always must watch, especially their main man Mark Tallo who can do things with the Wilson you just won't believe.

Haven't registered or done your team yet? Make sure you download the 3x3 Fantasy app and get a chance to win an official Wilson 3x3 ball.