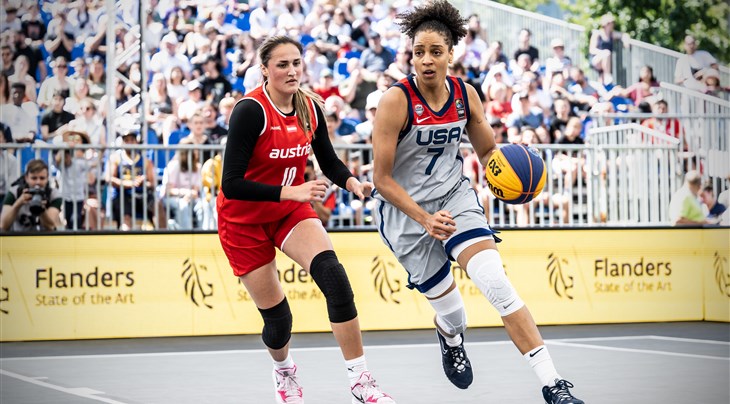 Latvia men's did not waste time on the court on Day 2. They finished both games, well before the 10-minute limit, including the fastest game of the tournament so far (6 minutes 45 seconds playing time against China). It was clamps time as the team only conceded 11 points total in two games (22-6 vs. China and 22-5 against Japan).

The former number 1 player in the world Nauris Miezis aka 'The Maze' led the Latvians in scoring with 19 points overall. It wasn't exactly a piece of cake but USA secured back-to-back wins against Austria (18-16) and New Zealand (19-14). FIBA 3x3 U18 World Cup 2019 MVP Hailey Van Lith had a team-high 11 points and Lauren Cox overcame a foot injury scare to add 10 for the two-time World Cup winners.

Lithuania's men and Belgium's women were the two other teams who had a clean record on Day 2. Lithuania had back-to-back Ws before the limit against Mongolia (21-15) and Chile (22-15). Belgium got the fans hyped against Egypt (19-6) after making them pretty nervous against Mongolia (a close 12-8 win).

The two 3x3 Olympians Laetitia Guapo and Marie-Eve Paget posted twin stats (11 points apiece) in wins against Brazil (22-11) and New Zealand (16-10), which lifted them on top of women's Pool B. We have a new top scorer after two days of competition and his name is Nauris Miezis, who shot the ball well (9/14) and was perfect from the line. Fresh off a 10-point effort against China, the Olympic champ added 9 points against Japan. His 19 points place him 1st in the scoring charts, ahead of Belgian men's star Thibaut Vervoort and women's stars Aitana Cuevas (Spain) and Kamile Nacickaite (Lithuania).

The action runs from June 21-26, and you can follow it live on TV and on social on the FIBA 3x3 YouTube, Facebook, Sina Weibo and Douyin pages, not to forget the FIBA account on Twitch. For more information, we have a 'Where to watch' article for you.