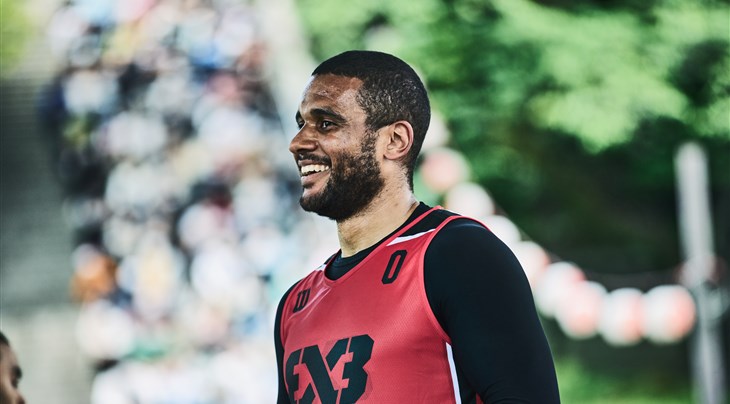 UTRECHT (Netherlands) - The FIBA 3x3 World Tour 2022 returns with a bang at the first ever Utrecht Masters on September 24-25 and some of the best players on the planet are ready to paint this historic Dutch city orange.

Let's look at the players to watch at the seventh Masters of this wild season.

No Mihailo Vasic at the recent Penang Challenger. No worries for Liman because they had dynamo Miroslav Pasajlic lighting up with an MVP performance.

The explosive 27-year-old can sometimes go under the radar in Liman's star-studded team, but he's on a roll having started his hot streak at the Lausanne Masters where he couldn't miss from close range.

If Pasajlic brings his two-pieces then there's no stopping him and he might just be able to lead the World Tour reigning champs Liman to a breakthrough Masters win in 2022.

The 23-year-old might just be the lead rookie of the year contender after blowing away expectations with a jaw-dropping debut season. The 6ft. 8in (2.03m) beast has taken to 3x3 like a duck to water with a complete domination around the rim.

Get the ball to him around the bucket and he's slamming it down, while Augustijnen is also an expert on D and loves nothing more than a personal block party.

Oh, and he can shoot the ball pretty well for a big fella making him already close to the complete package. He's just not fair!

Without Thibaut Vervoort aka 'Must See TV', Antwerp will need Augustijnen to flip the switch as this emerging star tries to lead his team to back-to-back Masters wins.

You just know 'Dimes' will be pumped up playing in the historic first Masters in the Netherlands.

This walking bucket has gone up a gear in 2022, where he has an insane 7.4ppg - the most by anyone who has played more than 10 games.

Van der Horst has always been able to heat up quicker than a kettle but he's added more consistency, which showed at the recent FIBA 3x3 Europe Cup 2022 where he scored an equal-high 37 points in 5 points to lead the Netherlands to the bronze medal.

In front of his rowdy fans, van der Horst's dreams of playing a home Masters will come true and you just know the 6ft. 6in (1.97m) Dutchman is going to play his signature air guitar celebration all event long.

Much like 'Dimes', this lethal Lithuanian has made the leap and he's become one of the most dangerous players on the World Tour.

The 29-year-old has traded his famous uzi for a deadlier weapon, maybe a flame thrower, because Uzupis is scorching the net right now to lead Sakiai's charge.

It's already been a memorable year for Uzupis, who won silver at the Crelan FIBA 3x3 World Cup 2022 before leading Sakiai to strong recent form, including a runner-up finish at the Montreal Masters.

Don't look away because Marijus Uzupis can go bang, bang quicker than you can say 3x3.

Who's our pick to make the highlight reel in every game? It just has to be 6ft. 8in (2.03m) Filip Kramer whose favorite video game is NBA Jam Session. That's just a guess, but you would think so with this dude taking flight like he's a pilot on Austrian Airlines.

With great Stefan Stojacic back to his old tricks, it's opened up more space for 30-year-old Kramer who uses the paint for his personal runaway.

With Vienna having won a first ever Challenger title on the pro circuit recently, they have set their sights on a historic Masters win. Whatever the result, one thing is for certain - Filip Kramer will feature in our top 5 highlights in Utrecht. Forming a deadly one-two punch with Ivan Popovic, Marko Stevanovic has made a statement this season and this 6ft. 8in (2.03m) monster fills up the box score.

Triple-fives might have been invented for this 27-year-old, who can do it all whether it be a bucket, rebound or highlight.

Belgrade are starting to make their move having finished second at the Prague Masters and if they create history in Utrecht with their first W on the World Tour then Marko Stevanovic must have stuffed the stats sheet. If you want the next big thing in 3x3 then it might just be 24-year-old Paul Djoko, who is quicker than a Tik Tok video. This nasty Frenchman has mad skills, just marvel at his handles which are sure to melt down social media.

And memo to defenders - if you want to avoid being a body bag then just don't even bother challenging this athletic beast at the rim.

He was a one-man highlight reel to lead Paris to a semi-final finish in Penang, but he's just getting warmed up because the 6ft. 3in (1.9m) Djoko will unleash his deep bag in his World Tour debut.

Fresh off dazzling for the Netherlands at FIBA EuroBasket 2022, there is no time to rest for de Jong who is out to prove he can dominate the half-court.

Named after Lakers legend James Worthy, de Jong is all Showtime as he leads local team Utrecht's charge. The springy 6ft. 4in (1.94m) has bounce like his shoes have lifts, but don't leave him open because de Jong can shift into heat check mode whenever he wants.