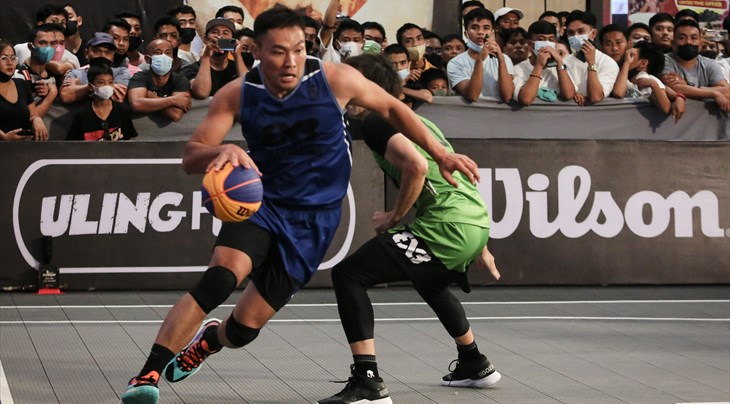 HONG KONG - Buckle up because the best players in the world are ready to put on a show at the first-ever FIBA 3x3 Hong Kong Masters as this crazy World Tour regular season comes to a close.

Here are the top players to watch:

'Doctor Strange' has been ranked No.1 all season and maintains the status of best player in the game despite some major challenges from several stars on this list.

Stojacic has found it difficult to recapture his amazing early season form, in one of the great runs we've ever seen on the World Tour, until a lights-out performance at the Riyadh Masters.

The 30-year-old finished well on top of player value and equal on points to prove he's back to his best at the business end of the season.

Move over Jackie Chan, these Latvians are the best superheroes in Hong Kong right now after beating up opponents during Riga's stunning 25-game winning streak.

The pair are averaging an insane 15.1 ppg combined, but that probably doesn't even do justice to them because these dudes are ripping the heart out of opponents with every dagger and spectacular play.

It's getting to a point where you have to flip a coin to decide who the MVP is with little separating them like in Riyadh, where Miezis' player value was 40.9 to Lasmanis' 40.7.

If one doesn't lay the smack down, the other will.

Sometimes this 27-year-old bull can be overlooked among Liman's star-studded line-up, but Pasajlic always ends up having the last laugh.

The 6ft. 3in (1.9m) ball wizard has played a key role in Liman's strong season and was part of their success in Utrecht, where he again proved he's a natural born winner by making his teammates better with slick passing and hustle plays.

Oh, he's also a deadly sniper so don't leave him open. A former Masters MVP and shoot-out winner, don't be surprised if this underrated dude is a contender for the crown in Hong Kong.

The lethal shooting of Marijus Uzupis and Aurelijus Pukelis often gets credited for Sakiai's late season rise, but the 31-year-old has played a key role and brings an x-factor for the lethal Lithuanians.

The 6ft. 4in (1.94m) high-flyer is a dunk machine who can make memes out of defenders. His energetic game helps pump up Sakiai who are reaching new heights during their memorable recent run.

We're continually mesmerized by what Tallo can do with the Wilson, but he's not just the flashiest player on the pro circuit.

He stuffs the stats sheet and reserves some of his craziest games against the best teams in the world, like when he scored 11 points against Ub at the Manila Masters, or his triple-five against Antwerp in his hometown of Cebu.

The 28-year-old is determined for success and he'll do everything he can to make that happen, while breaking ankles along the way.

You know what you'll get with 'Dimes' whose jumper is wet and if he doesn't settle for that then he'll get to the rim for an easy bucket.

The Dutchman is one of the best scorers in 3x3 and averages an insane 7.5 on this season's World Tour with only Karlis Lasamanis and Stefan Stojacic averaging more for those who have played more than 10 games.

Amsterdam have not been able to win a title this season, but if van der Horst heats up Hong Kong then they might finally celebrate a triumph.

'Must See TV' makes 3x3 look so easy and he's always good viewing. Vervoort is the rock for Antwerp, who are sometimes hot and cold like in Riyadh where they won only one of three games.

If the 24-year-old gets strong support from his teammates, Vervoort might just be the brightest star in Hong Kong.

No one - not even the man himself - could have imagined that Stefan Stojacic would be once again in the mix to sit on 3x3's throne. He's already surely completed the greatest comeback in sports in 2022, so everything from here is gravy.

It's been a hectic return but the former Liman star has not slowed down after averaging 7.3 ppg in Vienna's semi-final charge in Riyadh.

You wouldn't bet against Stojacic adding another chapter to his fairy-tale season.

The heart and soul of the Mongolians, Davaasambuu is a fighter and his presence helps inspire them.

He's not just all brute strength, the 6ft. 4in (1.93m) Davaasambuu is one talented dude who not only plays bully ball in the paint but shoots 38% from 2 on this season's World Tour.

You just know he'll leave blood, sweat and tears on the half-court in Hong Kong. The 6ft. 8in (2.03m) physical specimen is hugely popular in China and it's easy to see why. The 29-year-old is crazy athletic but has the determination to match.

He can be the best player on the half-court, especially on the defensive end, as he showed in glimpses at the FIBA 3x3 World Cup 2022 and particularly in Montreal to lead Beijing to an impressive quarter-final run.

With more reps on the World Tour, expect Yuanbo Zhu to emerge as a legit star very soon.