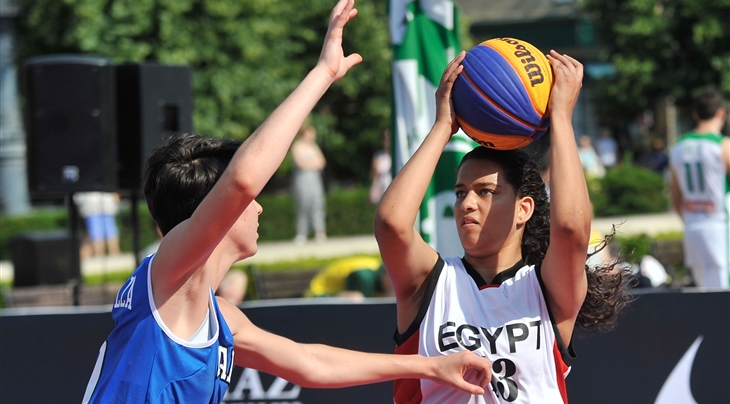 CAIRO (Egypt) - The Egypt Basketball Federation (EBBFED) rejoiced after the hosting rights for the FIBA 3x3 Africa Cup and the second edition of the FIBA 3x3 U17 Africa Cup were awarded to them by FIBA.

Rehab Elghannam believes the challenge is not insurmountable.

Following the announcement, Elghannam, a member of the Board of the Egyptian Basketball Federation, in charge of Mini Basketball and 3x3 told FIBA.basketball that her country is always prepared to host major events. "We have hosted many international Championships as the World Cup U19 and the FIBA Intercontinental Cup. However, this event is the first for 3x3, therefore it will be a tremendous task."

"So, we are currently working on choosing the optimum location for the event, the places of accommodation and contacting the relevant authorities to ease all organizational procedures. Our national teams on the other hand, are ready to compete in all categories of the 3x3 World Cup, and this will be the ideal preparation for us before the competition."

She admits that the EBBFED felt extremely happy and responsible at receiving the news to be host. "Of course, there had been prior discussions regarding hosting with Mr. Andreas Zagklis, FIBA Secretary General, during his visit to Egypt as part of the FIBA Intercontinental Cup held in Cairo. He praised Egypt's role in the development of 3x3, adding that Egypt should take a step forward in organizing 3x3 competitions.

"Of course, the Egyptian Basketball Federation, the players, and the entire 3x3 basketball community as well are thrilled to organize this historic event on the Egyptian soil for the first time."

On her country's expectations and challenges ahead of the event, she says; "we are both confident and challenged. As previously said, Egypt is capable of hosting any sports event. I anticipate high-level competitions with participation from all African countries."

"As a result of this official announcement, the Egyptian Federation will have the full support of all local authorities to deliver the Fiba 3x3 Africa Cup in the best way ever," she stated.

Speaking on the readiness of Egypt's teams, Elghannam offers that their teams began preparing for 3x3 several years ago.

"In Egypt, we formed a 3x3 league for both men and women U16 and 18. We have organized numerous 3x3 tournaments, competed in World Cup, and also hosted a Nations League (Africa - Asia) conference for Men and Women."

"We are continually trying to be prepared to execute everything that will assist us in 3x3. As a result, our teams will be fully prepared for the Fiba 3x3 Africa Cup," she concluded.