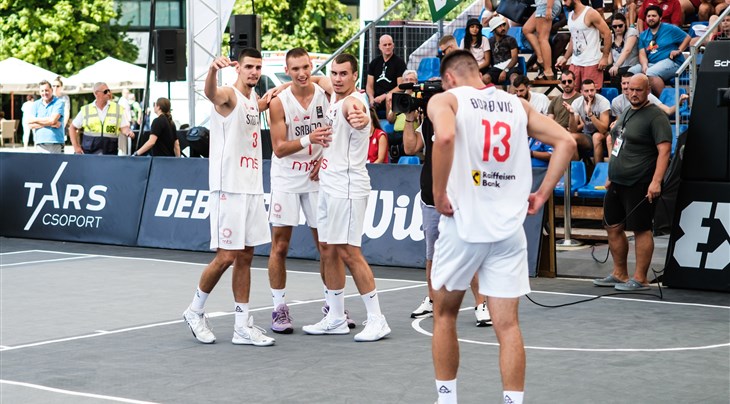 DEBRECEN (Hungary) - Four men's teams and 4 women's teams will fight for the medals at the 3x3 U18 World Cup after winning their respective quarter-finals on August 27.

Serbia want to win their first-ever 3x3 U18 World Cup and what better scenario than Debrecen to do it. With the Crelan 3x3 World Cup 2022 winners in the stands watching them, they defeated rivals Slovenia with a great team performance (21-15)

Serbia 🇷🇸 won the battle against Slovenia and book their tickets to the #3x3U18 World Cup semifinals 😤 pic.twitter.com/vKuYtg2FFI

Their rivals will be Lithuania, who defeated Portugal thanks to another epic performance from Rokas Jocys, who scored no less than 14 points in their 21 to 14 victory.

France and Ukraine will meet in the second semi-final in the men's side as they defeated Latvia and Germany respectively. Rostyslav Kabanov led Ukraine with 13 points in an epic duel against Latvia's Riners Lisicins, who got 12 points in their losing effort (21:15); while France managed to stop a spectacular German team (15:13).

In the women's side, the reigning champs USA defeated the Netherlands 21-15 with Sahara Williams leading with 9 points. They will face Spain in the semis in a rematch of last year's final and the Spaniards had no mercy against Brazil (20:6).

France and Germany will play for the second spot in tomorrow's gold medal game. "Les Bleues" defeated Ukraine 12-10 in a close match while Germany survived a thriller against Japan (14-12) in a game that was decided in the last seconds.

Germany 🇩🇪 vs France 🇫🇷 will be a show tomorrow for the #3x3U18 World Cup semifinals 🍿 pic.twitter.com/NXy6brOGB6

Action resumes tomorrow at 17:35 (CET) with the semi-finals and medal games!