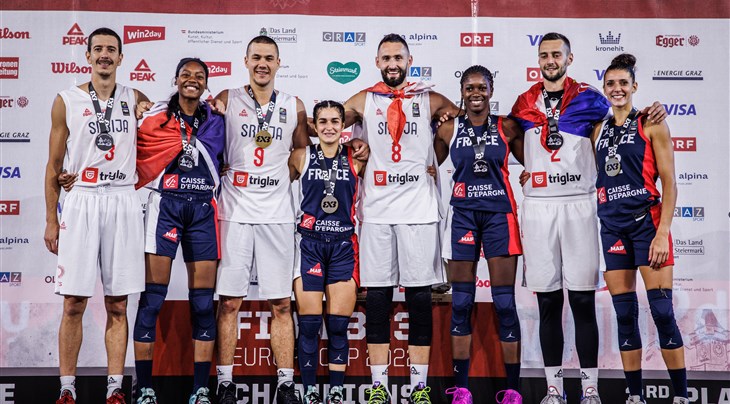 Serbia took home their fourth consecutive European crown in the men's category after defeating Olympic champions Latvia in the final (21-14). Dejan Majstorovic was named MVP after scoring a game-high 10 points and leading his team in scoring in Austria.

Nauris Miezis, who scored an unbelievable buzzer-beater in the semi-final against Lithuania and led Latvia to their second silver medal at the 3x3 Europe Cup, was also included on the Team of The Tournament alongside tournament top scorer Arvin Slagter, who won bronze with the Netherlands.

In the women's category, France won their third 3x3 Europe Cup title after beating the Netherlands in the final (21-14). The 24-year-old Myriam Djekoundade, who led the field in player value, was named MVP of the competition.

Natalie van den Adel, who topped all scorers in Graz. and struck bronze for the Netherlands, together with bronze medalist Aldona Morawiec (Poland) also featured on the team of the tournament.

Since Serbia and France had won the Crelan FIBA 3x3 World Cup 2022 in Antwerp, Belgium, three months ago, and therefore qualified for the next edition as reigning champions, Europe Cup runners-up Latvia (men) and the Netherlands (women) clinched their ticket to the FIBA 3x3 World Cup 2023, which will also take place in Austria, in Vienna.