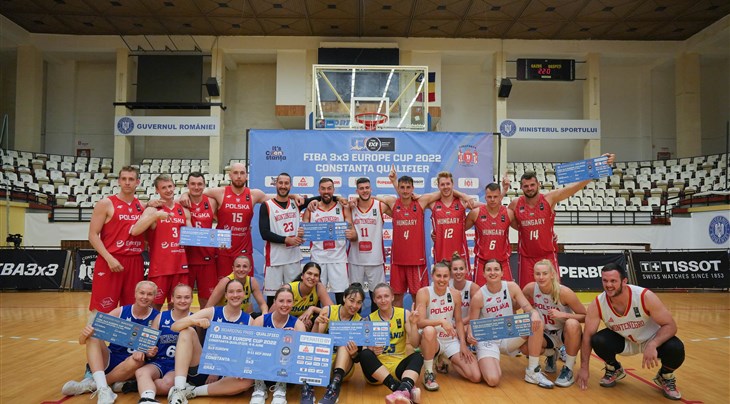 CONSTANTA (Romania) - Estonia, Poland and Romania's women, together with Hungary, Montenegro and Poland's men qualified for the FIBA 3x3 Europe Cup 2022 from the Romania qualifier, which took place in Constanta on June 4-5.

Poland's women are back at the Europe Cup after missing out on last year's edition. They were the only team in the women's category to keep a clean record (4-0). Their newcomer Klaudia Gertchen was named MVP of the Qualifier. And her teammate Aldona Morawiec did things like that.

Estonia's women are also back after finishing second in Romania. Following an opening loss against Poland, the team went full on "ice in their veins" mode with three straight one-point wins, including a thriller against neighbors Latvia in the decider. Hat tip to Kadri-Ann Lass who got the reverse lay-up high off the glass for the W.

Estonia book their ticket to the #3x3Europe Cup in an Overtime THRILLER! 👏🇪🇪 pic.twitter.com/7qoKxkCve8

2016 silver medalists Romania (women) will be once again in the Europe Cup after winning the last ticket game against Latvia. Sonia Ursu led the team with 34 points in 5 games and delivered highlights in mass quantity. Shout-out to Tokyo 2020 Olympian Ancuta Stoenescu for hitting a stone-called game-winner that kept Romania in the race earlier in the tournament.

In the men's category, Montenegro definitely got our attention after being the only team to win all their games in Constanta. Vaso Popovic buried the last 2 against Hungary to send his country to the 3x3 Europe Cup for the first time ever. Hungarian fans, don't panic, the men still made it to Graz after finishing as best third from the Romania and Israel Qualifiers.