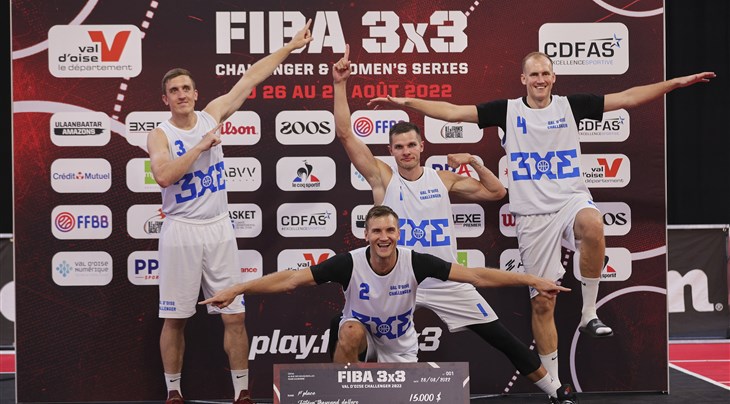 EAUBONNE (France) - A sweet shooting Sakiai Gulbele (LTU) rediscovered their best form to claim their second major title of the pro circuit this season after winning the FIBA 3x3 Eaubonne Challenger on August 27-28.

They bounced back impressively after a sluggish period since winning the Ulanbaatar Challenger in May and in the process booked a ticket to the Utrecht Masters, which is the seventh stop on this season's World Tour.

They were: No.1 points scored, best shooting value and fewest points allowed

Sakiai Gulbele are a bit of a wildcard and can run hot and cold but they fully justified their No.1 seeding with a thorough domination in Eaubonne.

The lethal Lithuanians clicked on all cylinders to hit the 21-point target in each of their five games. They created a heat wave in Eaubonne to overwhelm every opponent except returning fan favorite NY Harlem (USA) in a classic quarter-final, where Sakiai prevailed 21-19 in a thriller.

MVP Aurelijus Pukelis and Crelan World Cup 2022 silver medalist Marijus Uzupis issued a reminder that they can be the deadliest duo around as they combined for an insane 74 points and were top two in player values.

With their two guns unloading, Sakiai shot a blistering 40% from deep as they torched opponents in a reminder of their ceiling. It ended a period of struggle for Sakiai, who will be now eyeing their first Masters crown since their memorable breakthrough at the FIBA 3x3 Montreal Masters 2019.

It might have been a disappointing ending, where Vienna couldn't handle the scorching hot Sakiai, but the Austrians again made a strong run.

It was the third straight Challenger final for Vienna, who have now strung together enough spectacular performances to cement their status as the real deal.

Making their efforts even more impressive, Vienna emerged from Pool C - the 'Group of Death' - with a tight win over NY Harlem before falling in a heart-stopper against Sansar MMC Energy (MGL).

But they turned it up a level with an easy quarter-final win over rising Tel-Aviv (ISR) before winning an epic semi-final over dangerous Belgrade Partizan (SRB).

That's where the Ws ended but Vienna should enter the Montreal Masters - their first World Tour event since the Utsunomiya Opener - with a lot of confidence.

Superhuman Stojacic: Maybe 'Mr Robot' needs a new nickname. Superman? Superhuman? Because the Serbian legend just continues to go from strength to strength since returning from a chronic knee injury.

Perhaps he's extra motivated seeing his brother Strahinja Stojacic become the 3x3 darling and No.1 ranked player, but the former Liman star is playing with a chip on his shoulder.

Vienna book their spot in the final and just LOOK AT WHAT IT MEANS 🤩🤩 #3x3Challenger #3x3CHEaubonne pic.twitter.com/DbLRVYKuku

Despite being the lower seed, in-form Vienna were probably the favorite after their strong run of form over the last month.

But Sakiai brought their raincoats with Paulius Beliavicius going splash, splash to get the Lithuanians off to a fast start. In a groove, they shared like they cared to lead 7-2 faster than you can spell 3x3.

After a quiet start, Stefan Stojacic tried to spark his team with the pretty left-handed layup and moments later he again scored at the rim to cut Sakiai's lead to 11-6.

But there would be no comeback as the red hot Aurelijus Pukelis scored 3 quick points to shut the door on the Austrians. It was time for Marijus Uzupis to pull out the uzi and a wide open layup gave his team a strong 18-9 lead as Sakiai could smell the title.

Pukelis sealed the deal from the stripe as Sakiai, who shot an incredible 15 of 21 from the field, found form in style.

The reward: Two tickets to the Utrecht Masters

Sakiai Gulbele and Vienna earned their tickets to the Utrecht Masters on September 24-25, 2022.

Key Stats:
- Only two of the top four seeds made the semis with No.2 seed Jeddah (KSA) exiting in the quarters and Dusseldorf LFDY (GER) failing to emerge from pool play after a winless campaign.
- Sakiai laid the smack down in the final against Vienna to win in just 6'33" of playing time - the second fastest game of the tournament.
- Belgrade Partizan (SRB) star Ivan Popovic was again poppin' to finish No.1 in highlights (20) and had arguably the best game of the tournament with an insane 9 points, 3 rebounds and 10 highlights plus the buzzer beater to take down Dusseldorf LFDY during pool play.