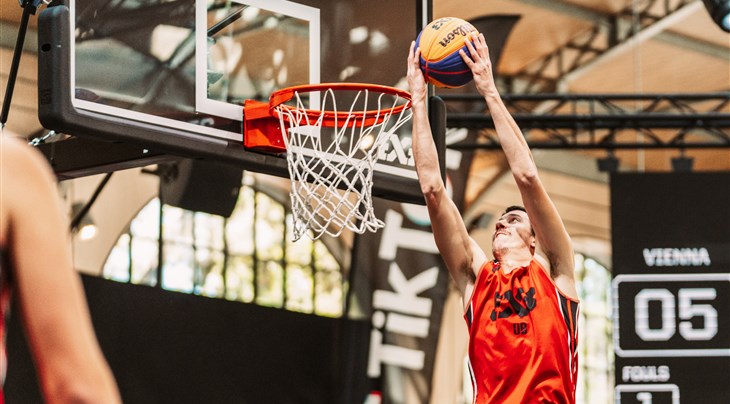 MIES (Switzerland) - As we have a rare breather in this wild FIBA 3x3 World Tour 2022 season, let's do a deep dive of the major stats to find out which stars sit on top with two Masters left before the showpiece Abu Dhabi Final.

As you are going to soon find out, Ub superstar Strahinja Stojacic has filled up the stat sheet and sits on top of many categories after an absolutely insane season, where he has already won three Masters MVPs.

'Doctor Strange' might need a new nickname and perhaps be called 'Doctor Stats' because he's No.1 in probably the most important category - top player value with a massive 176.5 rating. He sits comfortably clear of teammates Dejan Majstorovic (159.6) and underrated Marko Brankovic (149.2).

It's going to take some doing overtaking Stojacic, who can do it all on the half-court to be a walking triple-five.

Guess who? Yep, you guessed it, The lanky 6ft. 6in (1.98m) No.1 ranked player is a walking bucket and it's no surprise to see him at the top of this list. He can slither past defenders like a snake and dunk on anyone silly enough to be standing in his way at the rim.

Stojacic is impossible to stop close to the basket as underlined by his crazy 75% shooting on ones. He also buried some big shots from behind the arc this season though his 2-point percentage is his Achilles' heel (27%).

Once again, Stojacic leads his teammates Majstorovic (161) and Brankovic (142), who sit on the podium.

Three from three so far for Stojacic who isn't just the most effective player in the game but he's also the most entertaining as underlined by him leading highlights.

And he's well in front with Thibaut Vervoort (75) proving he's 'Must See TV' in second and Nauris Miezis, the Olympic gold medalist with a deep bag of tricks, at third.

If you're curious about where the highlights come from, here's the breakdown:

Interestingly, Stojacic has not yet scored a single Maurice Lacroix buzzer beater on the World Tour so far this season.

See, we weren't kidding when we said Stojacic can do it all on the half-court. He's not just a scoring machine but he loves throwing dimes and getting his teammates in the action. The 30-year-old is just a flat out winner and really needs to be called 'Doctor Success'.

But he has serious competition with Vervoort (41) close behind and Majstorovic (32) a little further back.

Just to be clear, the fact that Stojacic has played the most games on the World Tour this season (28) definitely played a key role in his statistical dominance. On a per game basis, his Latvian rival Nauris Miezis would rank first with 1.94 key assists per game (in comparison to Stojacic's 1.57).

Finally someone other than Stojacic! And it's well deserved for Aleksandar Ratkov, who has gone up a level this year as evidenced by him crashing the boards.

The 6ft. 4in (1.94m) Liman star isn't the biggest or strongest player around, but he's an athletic beast who can snatch a board out of position. He leads muscular Nemanja Barac (101) and teammate Mihailo Vasic (96), who along with Ratkov form an intimidating tandem down low.

Who is 3x3's biggest assassin? It's Thibaut Vervoort who is a cold-blooded killer as underlined by his four Maurice Lacroix buzzer beaters this season. There is no one you want more with the game on the line than this 24-year-old, who has ice in his veins.

In fact, only Worthy de Jong (2) has multiple Maurice Lacroix buzzer beaters this year - an impressive feat considering the Dutch newcomer has only played two Masters - to only confirm that Vervoort is most certainly must see tv in the clutch.

Just don't try to score on these two defensive forces if you want to avoid embarrassment. Westher Molteni has been holding block parties for years and his crazy athleticism means he can fly for the rejection out of nowhere.

While Marko Cakarevic's rim protection has helped put Belgrade Partizan on the 3x3 map and it's pretty impressive considering he's only played 10 games on this year's World Tour meaning he's averaging over a block a game. That's filthy.

He's one of the OGs and Majstorovic hasn't lost his golden touch. He's 'The Maestro' after all. You dare not leave this sniper open otherwise he'll make you pay. He's all cash from deep and narrowly leads Vervoort (47) and sharpshooter Stefan Kojic (42).

The deadly Dutchman makes nearly half of his 2s which is just insane. When he gets into heat check mode, Slagter slaughters opponents with his accurate radar.

There are a lot of great shooters in 3x3 but the stats don't lie - Arvin Slagter is the most lethal of them all. But there are a couple close behind - lights out Princeton duo Robbie Hummel (45.5) and Damon Huffman (42.4) - who can close the gap if they start splashing from deep.