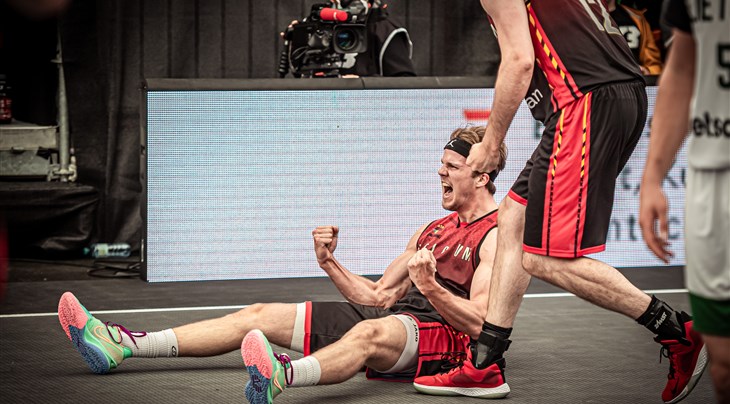 ANTWERP (Belgium) - The top players on the planet are ready to put on a show at the Crelan FIBA 3x3 World Cup 2022 as they fight for the crown in the showpiece event of the year on June 21-26.

Here are 10 men's players you just have to watch.

This American might just have the best nickname in 3x3. You know what it is - 'Disco Domo'. It's well earned because no one has fancier foot work than the Harlem native, who also possesses the some of the finest handles in the game.

Oh and he's a flame thrower from deep but the 5ft. 10in (1.78m) wizard can also score from around the bucket even though he's barely taller than Kevin Hart.

Since winning the FIBA 3x3 World Tour 2019 regular season MVP, Jones has unfortunately not been sighted much due to the pandemic and had a bitter taste in his mouth after being part of Team USA's unsuccessful efforts to qualify for last year's Tokyo Olympics.

He'll be out for revenge and an angry 'Domo' is a scary prospect for opponents.

He's No.1 ranked in the world and for good reason. 'Dr Strange' has been casting a spell on his opponents for the last 12 months and went up a level at the Utsunomiya Opener, where he won MVP in a slamming and shooting exhibition.

A leg injury didn't limit his powers as he courageously fought through the pain to help Ub win the Manila Masters. The 6ft 6.in (1.98m) human highlight reel is back fit and firing as he aims to join his famous brother Stefan Stojacic aka 'Mr Robot' in winning a World Cup gold medal for Serbia.

It's a brave person betting against the best player in the world.

Not since Kareem has someone looked more fire hoopin' while wearing goggles. He's no nerd, this Puerto Rican legend is a bully on the half court as Clavell helped lead a revival last year for an OG 3x3 nation.

Full of passion and pride, Clavell had a comeback for the ages in 2021 to plant San Juan PCI Group's flag as a fan favorite returned to the big stage.

If the game is tight, this dude has nerves of steel and he won't be satisfied until he wins it all.

The Pole is a walking bucket but you knew that already after he single-handedly helped his country win bronze at last year's FIBA 3x3 Europe Cup 2021 with a buzzer beater celebrated in Poland like Michael Jordan's famous 'last shot' against the Jazz in 1998.

Taking the baton from Poland 3x3 legend Michael Hicks, Zamojski has similar swagger - though without the smack - as he prefers to let his game do the talking.

The 6ft 4in (1.94m) dynamo is aiming to do something even the great Hicks couldn't pull off - win the gold medal for Poland.

Buckle up because one of the strongest players to ever step on the half court is back in the big time.

Tai Wynyard dominated in youth 3x3 competitions mid-last decade (he won the U18 World Cup in 2015) before injuries derailed a promising hoops career that saw him play for NCAA heavyweight Kentucky under legendary coach John Calipari.

The 6ft 10in (2.08m) big fella is feeling fresh now as he proved in Doha to book the Tall Blacks' ticket with a buzzer beater in a thrilling final against Iran.

Whenever his team needs a bucket, Wynyard puts his head down, shouts 'get out of my way' and bulldozes past defenders to the rim. It's almost automatic.

He's so strong that he could have had a career in WWE or as a rugby star for his country's famous All Blacks team but Wynyard - whose father was a wood chopping champion - fortunately chose 3x3 and that's bad news for his opponents.

The Dutch Master is memorably nicknamed 'Dimes'. Yes, he can dish out a filthy pass if he wishes but this dude is one of the best at putting the Wilson in the hole.

He's been fire on the World Tour this year (36 points from just 4 games in Utsunomiya), which led him to showcase a lot his signature air guitar celebration.

The 6ft 5in (1.95m) beast has a deadly first step making him unstoppable close to the rim, but he's steadily improved from deep to make van der Horst the complete package.

If he gets on a roll then 'Dimes' will be playing string music all tournament long in Antwerp. It's time for 'Robin' to have his own superhero franchise. The moment of need has arrived for the side-kick to put the cape on and be the main star of the show.

Fortunately, Nauris Miezis has no problem adjusting with the Olympic gold medalist and former world No.1 capable of dominating whenever he pleases.

Without his partner-in-crime Karlis Lasmanis, Miezis put Latvia on his back in Utsunomiya with an insane 10.3ppg to again prove he can be the baddest man on the half court when needed.

The shorthanded Olympic gold medalists will strangely go into the World Cup as underdogs and that might just suit 6ft. 3in Miezis who has been written off his whole life but every single time answered the critics.

'Worm' is one of the most iconic players to ever step on the half court. Ochiai can make the Wilson talk and has more fakes than in your spam folder.

The lethal lefty is out to prove he's still got game at 34 years old. You bet he does with the 2020 Olympian likely to finish in our top plays of the tournament through either a sick no-look dime or fooling defenders with his deep bag of tricks.

Just let him cook and Ochiai will do the rest.

Mido Mohamed might be only 5ft. 11in (1.80m) but he stands tall in Africa and is probably the continent's best player. It's time the rest of the world recognizes his mad skills and there is no better place than Antwerp.

He's already delivered Egypt a gold medal at FIBA 3x3 Africa Cup 2019 and if he can get his country anywhere near the podium then Mido Mohamed will be a household 3x3 name.

There might not be a player with more pressure than hometown hero Thibaut Vervoort, who is Belgium's best player and his country's hopes rest on his silky smooth shot.

If anyone can handle the expectations, it's 'Must See TV' who wants to prove he's still the hottest show around after a mixed start to the season following an incredible debut in 2021.

More hyped than Jurassic World Dominion, Vervoort will have all eyes on him but no one else can get the crowd hyped like 'Must See TV' who will be a national hero if the host can be the most in Antwerp.