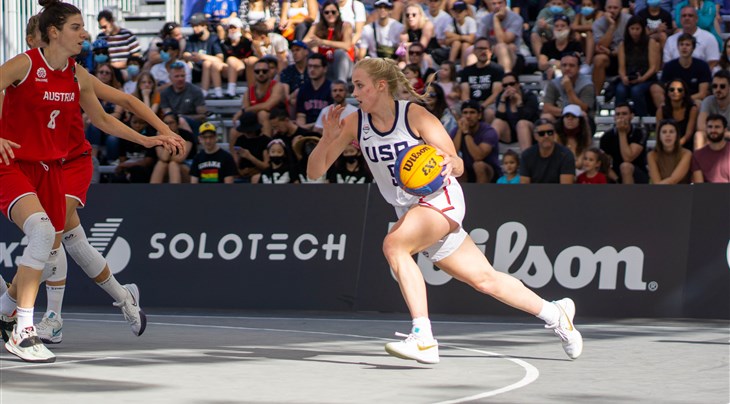 ANTWERP (Belgium) - Buckle up because the best players in the women's game are about to put on a show at the Crelan FIBA 3x3 World Cup 2022 on June 21-26.

As we count down to this year's biggest event, let's look at 10 players to watch in Antwerp.

The 20-year-old phenom is a walking W every time she steps on the half court having most memorably claimed MVP at the FIBA 3x3 U18 World Cup 2019.

Maybe it's not surprising considering her mentor was Kobe, but Van Lith is a flat out baller and can get to her spot whenever she feels like it. The lethal lefty has the shooter's touch, especially in crunch time when she loves pulling out the dagger.

As the biggest name on mighty Team USA, there is a lot of pressure on HVL but she's born to be a star and she'll shine brightest on the biggest stage of them all.

The speedy Spaniard finally overcame a series of dramatic overtime Ls in 2021 to lead Spain to an emotional victory at the FIBA 3x3 Europe Cup 2021.

The former number 1 player in the world has become better every year and is dangerous as a passer on the pick and roll and from deep.

With their leader on the half court, Spain will always have the heart of a champion.

Already a 3x3 legend and yet only 28 years old.

You better believe she can deliver an ankle breaker before flipping it into the hoop. Her bag is heavier than a shopping cart and there isn't really anything you can do if she's feeling it.

If Sonia Ursu is a wonder woman in Antwerp then Romania might just make a deep run.

There is no more intimidating presence than 6ft. 3in (1.90m) Greinacher who is maybe the best scorer in 3x3, rebounder and defender. That's just plain mean.

And it all adds up to Sonja Greinacher being the best player in the game right now.

The 6ft. 1in (1.85) beast is like a freight train out of control when she gets a full head of steam. The 'Duchess of 3x3' loves nothing more than when the lane is open, as she makes her move with insane handles for her size leading to an automatic finish.

The Europe Cup 2018 silver medalist is a walking bucket and there isn't much you can do against the towering Van den Adel whose work in the paint should be hung up at the Rijksmuseum. Her spin moves, flip shots and baseline drives are a collection of pretty pictures and underline her incredible skill and technique.

Just sit back and watch her go to work.

Lil Wang is big time. The bigger the stage, the better the 29-year-old plays.

The 5ft. 9in (1.75m) dynamo proved that at the Tokyo Olympics, where she finished equal top-scorer to lead China to a surprise bronze medal. She's an absolute flame thrower who is simultaneously inspiring her billion plus compatriots to dream big.

The sky is the limit for Wang, who might well just top the scoring charts by the end of Antwerp. If one doesn't hit you, the other will. It's just not fair that Canada has twins Michelle and Katherine Plouffe who are mirror images of each other on the half court.

In other words, it's double trouble for opponents who don't know which one hit them. Their chemistry, as expected, is off the charts as they continually give nightmares to their opponents with ballerina footwork and five-star passing.

The 6ft (1.83m) Goncalves became a fan favorite after leading Brazil to the silver medal at the first ever FIBA 3x3 AmeriCup last year.

'Sassa' plays with swag and loves nothing more than making the paint her personal playground (and nothing less than doing a post-game interview in English).

Her bubbly personality is the heartbeat for a Brazilian team hoping to make some noise in Antwerp and it's Goncalves whose game might just do the talking. The pressure will be on the host but they might just be able to shock the world at home because Belgium have a secret weapon.

Tokyo 2020 Olympian (in basketball) Julie Vanloo will make her entrance onto the big 3x3 stage although the 29-year-old has plenty of local experience. The speedy 5ft 8in (1.73m) Vanloo has the hopes of a nation on her slender shoulders but it's a pressure she relishes.

Vanloo might well become a hometown hero by the time the World Cup is done and dusted. And we have no doubt our lethal crosses and other no-look dimes will find their way to the Top 10 Plays of the Tournament video.

Guapo is one of 3x3’s greats, but had a tougher time in 2021 to be knocked off her No.1 ranking she held for some time.

But don't write off this 26-year-old athletic marvel, who could have been an Olympic 100m sprinter, marathon runner or champion cyclist if she so pleased.

Luckily, she chose 3x3 and it's been a wise choice having accomplished almost everything. But she's missing the world crown and if Guapo can lead Les Bleues to the title then she might just regain her status as the best in the business.