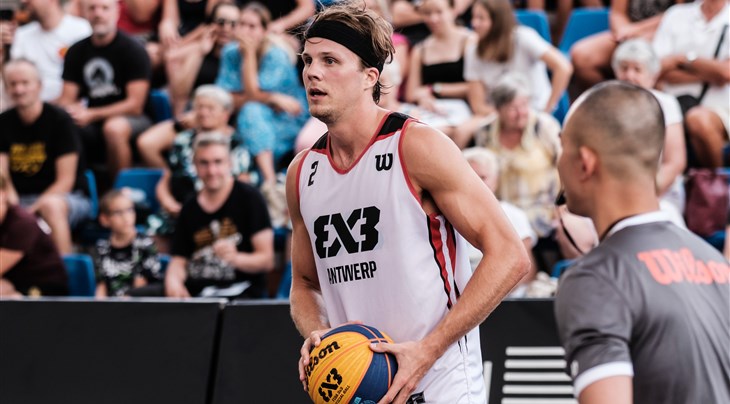 After a memorable stop in Manila earlier in the season, 3x3 obsessed Filipino fans will be rocking the Shopping Mall Seaside particularly watching their hometown heroes Cebu Chooks (PHI) who are led by magician Mark Tallo.

The Philippines' No1 player Tallo took centre stage in Manila with his wizardry melting down social media and he'll need all the tricks against tough Pool A opponents Antwerp (BEL) and Ohama 3BALL (USA).

No.1 seed Antwerp finally got their first World Tour Masters win with an emotional victory in Debrecen but they couldn't back up in Utrecht as the brilliant Belgians crashed in the quarters.

Star Thibaut Vervoort aka 'Must See TV' will be looking to hit the play button and Antwerp need to be firing from the get go with no guarantees in what might be the 'Group of Death', which also features rising Omaha.

The Americans are starting to make their move after winning the Quebec Challenger then making the semis at the Montreal Masters. They have a star-studded team with excitement machine Malik Hluchoweckyj sure to compete with Tallo for most jaw-dropping highlights.

Reunited Riga (LAT) highlight Pool B and have their famous foursome back as they make an assault on the business end of the World Tour.

They showed no signs of rust when comeback king Karlis Lasmanis landed Flight KLM to perfection in a MVP performance lead Riga back to familiar success and a title in Montreal.

'Batman' and his sidekick Nauris Miezis aka 'Robin' will need all their superpowers against dangerous Sansar MMC Energy (MGL), who enjoy Filipino soil having made the semis in Manila.

Anand Ariunbold shined bright back then and he's ready to go toe-to-toe with Lasmanis in a match-up with more hype than the release of iPhone 14.

The always competitive Utsunomiya BREX (JPN) will be out to make it much more than a two-horse race in Pool B.

No.3 seed Amsterdam HiPRO (NED) are the team to beat in Pool C and hoping to rebound after a quarter-final exit at the Utrecht Masters, the historic first-ever time the World Tour travelled to the Netherlands.

It was the first time the Dutchmen hadn't made the semis on this season's World Tour and you just know they'll be fired up to make amends. With certified bucket-getter Dimeo van der Horst in the line-up, Amsterdam should be a serious contender but first have to get past Jeddah (KSA) and Saitama ALPHAS (JPN).

The much-hyped Jeddah have struggled to gel this season, but things might finally be taking shape after they reached the quarters of the recent Eaubonne Challenger, where lethal Lithuanian Ovidijus Varanauskas was deadly.

Saitama could prove a thorn, particularly with Tomoya Ochiai capable of doing things with the Wilson you've never seen before.

Pool D looms as a battle between No.4 seed Ulaanbaatar MMC Energy (MGL) and Lausanne Sport (SUI). These highly talented teams are always dark horses with the Mongolians desperate for a deep run having made recent quarters in Montreal and Lausanne.

They have the usual suspects back in Cebu with Delgernyam Davaasambuu and sniper Steve Sir capable of taking turns with heat checks.

Ulaanbaatar face an early litmus test against natural born entertainers Lausanne who were runner-up at home.

But the spectacular Swiss have often struggled to match their home success but this looms as a perfect opportunity with their stars in action, including speedy Giles Martin and Westher Molteni aka 'King Wes' who will be out to snatch the crown in Cebu.

The third team in Pool D will come from qualifying.