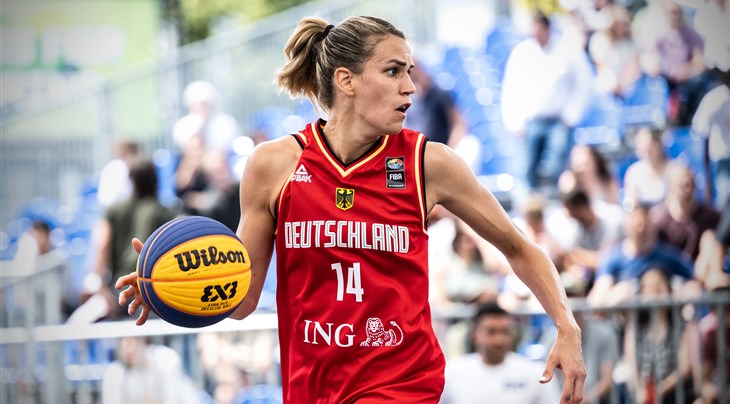 POITIERS (France) - There is no time to catch your breath after an insane Crelan FIBA 3x3 World Cup 2022 with the Women's Series resuming at the Poitiers Stop on June 28-29.

And the quick turnaround is probably music to the ears of Germany, who are the top seed in the 12-team draw and coming off an early exit at 3x3's biggest event.

Germany should be encouraged by returning to their comfort zone of the Women's Series, where they finished top of the standings in a breakout 2021 and claimed the season opener in Tel Aviv.

But, as we saw in Antwerp, there won't be any guarantees with the action set to go into overdrive in the two-day spectacle.

Germany, as mentioned, are out to quickly forget about their World Cup flop, where they bounced out in the play-in to eventual silver medalists Canada.

To be fair, Germany had a tough run and were probably in the 'Group of Death' where they lost games to eventual bronze medalists China along with Lithuania, who finished fourth.

Still, top seed Germany would have been bitterly disappointed having achieved so much in the last 12 months and they boast the top three ranked players in the world led by No.1 Sonja Greinacher.

Germany are expected to fare better in pool play here against Slovakia and Italy but won't be taking anything for granted right now. Their potentially biggest obstacle in the tournament might be No.3 seed USA, who also suffered an early exit at the World Cup. After storming through unbeaten in pool play, the Olympic gold medalists were knocked out by rival Canada in the quarters.

But the red, white and blue will have a different team in Poitiers although World Cup 2014 winner Cierra Burdick remains and her experience is hoped to give USA a return to that winning feeling.

FIBA 3x3 World Cup 2018 champs Italy didn't make the cut for the World Cup but have the pedigree and can never be underestimated, especially with Raelin D'Alie at the wheel because 'Rae Rae' is one of the best to ever do it.

If you want to pick a team other than the usual suspects, No.4 seed Israel might just be able to cause an upset or two.

They impressed on home soil in Tel Aviv, where they knocked off Mongolia and almost upset Netherlands, with towering Alexandra Cohen in dominant form.

Israel were winless at the World Cup but held their own in tough losses against European powers Spain and Netherlands.

Cohen showcased her skills on the big stage with 19 points from 4 games and she'll be better for the experience as the 6ft. 5in (1.96m) bucket getter threatens to take the pro circuit by storm. The World Cup winning glow of France might just rub off on No.2 seed Bordeaux Ballistik (FRA), a guest team in Poitiers. And it's a chance to see their young guns inspired by France's top players taking the crown in Antwerp.

You'll recognize Marion Heriaud's name as she's the youngest sister of former Nations League MVP Caroline Heriaud. And don't take your eyes off of 23-year-old Claire Parisi, who's got a bag so big it's a suit-case.

Private team EXEWING (JPN) will be hoping to build after promising signs in Tel Aviv, where American recruit Camille Zimmerman was a flamethrower and the team might just prove to be a dark horse contender.