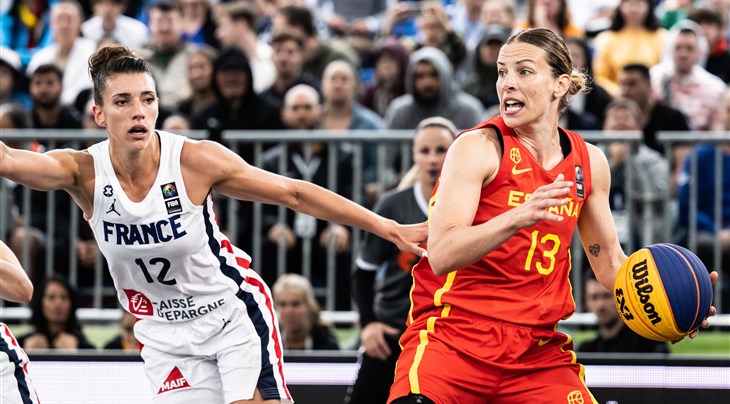 GRAZ (Austria) - Get ready for non-stop entertainment as some of the best women players in the world fight for the continental crown at the FIBA 3x3 Europe Cup 2022 on September 9-11.

As we count down to this year's biggest event in Europe, let's look at the top players to watch in Graz.

The bigger the stage, the better Laetitia Guapo performs. She proved this by claiming MVP at the Crelan FIBA 3x3 World Cup 2022 after leading France to the biggest prize of the season.

But the 26-year-old is not done making 2022 her most memorable year yet. Guapo has a chance of an incredible double and you wouldn't bet against her because she's already tasted Europe Cup success having been part of France's triumph in 2019.

After a tough 2021, Guapo has rebounded back to her brilliant best and issued a reminder that she's one of the best to ever do it. Her 2022 season will become the stuff of legend if she's the queen of the half-court in Graz.

Someone might need to perform a medical check on Sandra Ygueravide's heart because it must be double the normal size. You know this because the speedy Spaniard is all heart on the half-court.

She left her blood, sweat and tears in Paris after leading Spain to an emotional 3x3 Europe Cup 2021 victory ending years of heartbreak. For 3x3 fans, Ygueravide has become as beloved as Serena at Flushing Meadows and it's easy to see why.

She's put so much into her game, which keeps getting better. Keep an eye out for her insane passing on the pick and roll, while Ygueravide can score whenever she wants.

With the heart of a champion, Ygueravide will do everything she can to make Spain repeat as European champions.

If the perfect 3x3 player was built in the lab then the prototype might just be Sonja Greinacher. The 6ft. 3in (1.90m) German can do it all.

She might just be the best scorer, rebounder and defender in the game and the No.2 ranked player can basically do everything else too.

Her skill set is just unfair as Greinacher has repeatedly shown on the FIBA 3x3 Women's Series, which she has flat out dominated over the past two seasons.

International competitions have proven somewhat her kryptonite but that should steel the towering Greinacher to even greater heights.

We know the 27-year-old can melt social media with her viral dance videos but Joana Soeiro might just be the next big thing in 3x3 as she leads emerging Portugal up the ladder.

The 5ft. 6in (1.69) Soeiro is a wizard with the ball and can dish out the nastiest dimes imaginable.

She can make the Wilson do things you've never seen before, so don't be surprised if Soeiro goes viral on social media during the 3x3 Europe Cup.

The lethal Lithuanian will enter Graz with swag having dominated the Women's Series recently, where she topped the scoring in Quebec and finished equal second in her country's historic victory in Prague.

The 5ft. 11in (1.81m) is a walking bucket and can score from inside and out to be a threat from all over the half-court. She loves nothing more than having the Wilson in her hands when the game is on the line. Memo to defenders - don't leave her open because Nacicikaite is always clutch.

Nacickaite has become a top 10 player in the world and you better believe she's aiming for No.1

When she's feeling it, this Pole can make difficult shots look ridiculously easy. She might be able to shoot from the logo blindfolded for all we know.

The 6ft (1.83m) bucket getter has been the inspiration behind Poland's consistent form on the Women's Series 2022 and she's hoping that continues on Europe's big stage.

If she creates a heat wave in Graz then Poland's women might just be celebrating a first 3x3 Europe Cup medal.