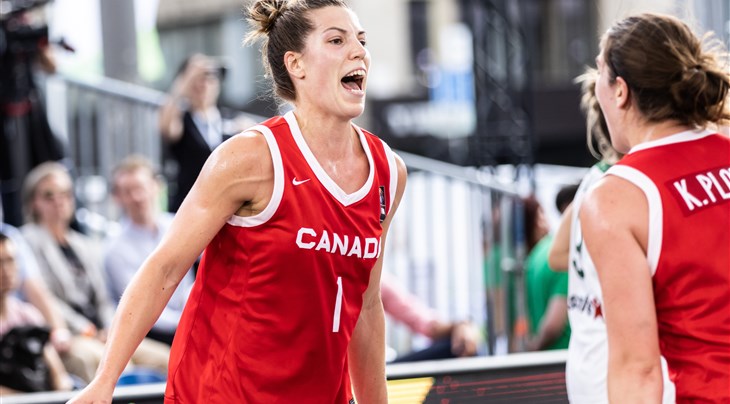 There are too many to choose from, but we've found seven you just have to watch in the second edition of the AmeriCup.

You might have seen this 21-year-old prodigy light up the FIBA 3x3 Nations League 2022, but if not then you're in for a treat.

Acevedo makes up for her lack of height - she's 5ft 5in (1.66m) - but like Messi her skills are out of this world as she makes taller opponents look foolish. Just wait and see what she can do with the Wilson, while her shooting range might extend out to South Beach.

It feels liker her star has been on the rise for some time, having once lit up the Youth Olympic Games 2018 at home in Buenos Aires, but maybe this big continental stage will be her true breakout party.

She's No.1 for good reason. The top-ranked player in the world has been one of the best in the business for some time, but Plouffe has somehow taken her game to another level in 2022, where her trophy cabinet is getting full.

The 6ft. 3in (1.9m) superstar loves the bright lights, as we've already seen numerously this year, and Plouffe will be perfectly suited to glitzy Miami, where she'll continue to stuff the stats sheets. MP is a walking double-five and scarily there are two of her - with sister Katherine almost as good.

Plouffe was the second top scorer in Miami 12 months ago as she led Canada to bronze, but you know she won't be content until she has gold around her neck.

The 28-year-old stole the show at AmeriCup 2021, as she led Brazil to a surprise silver medal with 32 points in the tournament.

She became a fan favorite due to her back-to-the-basket skills but also high energy and dancing skills off the court. Speaking of speedy players, get ready for lightning quick Paula Carrasco who can run rings around wannabe defenders.

The 28-year-old gave a glimpse of her deep bag at the Crelan FIBA 3x3 World Cup 2022, but she'll be sure to have more tricks up her sleeve as she looms as one of the most entertaining players in the tournament. It's almost impossible to separate the USA's WNBA talent, but Lexie Hull might just be the standout after she dominated FIBA 3x3 U23 World Cup 2022. The Indiana Fever player was unstoppable and showed that perhaps the half-court is her true calling.

The 23-year-old, who was selected sixth in the WNBA Draft, was a bucket getter and scored from everywhere to finish top in scoring with 63 points from 7 games. The 6ft. 1in (1.85m) Hull can get in heat check mode quickly and her shot-making defies logic.

Simply pass her the Wilson and Hull will score a bucket.

Puerto Rico will be out for redemption in Miami after they fell short of a medal 12 months ago. Their hopes of making the podium look good, especially with impressive 25-year-old Vargas leading the way.

She showed flashes at last year's event with her mean crossover but she might just be the breakout star this time around having dominated in local leagues back home. Remember the name before the hype train goes out of control for Annelisse Vargas.