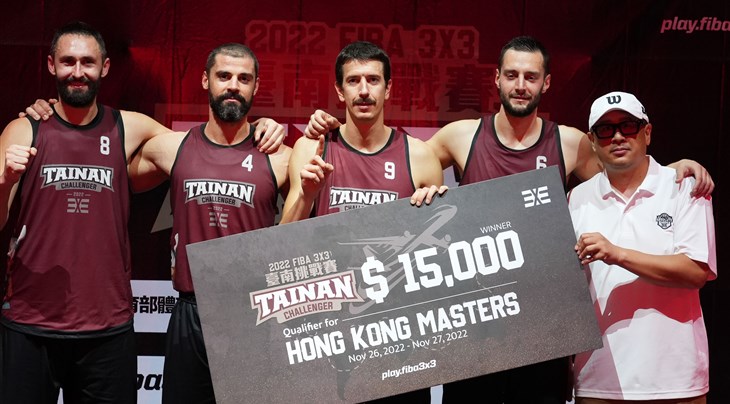 Having stumbled recently after an all-conquering start to the season, Ub made a statement to book a ticket to next month's Hong Kong Masters.

They were: No.1 points scored, best shooting value and highlights.

For whatever reason, Ub hadn't quite recaptured their irresistible form from the first half of the season. But as the Abu Dhabi Final loomed, and with a slew of rivals hitting their straps, the spectacular Serbs wanted to start collecting titles again.

And they did exactly that in Tainan City with an unbeaten run starting with impressive day one victories over dark horses Cebu Chooks (PHI) and Utsunomiya BREX (JPN).

But then it became harder as they squeezed past an improved Jeddah (KSA) 21-16 in the quarters before superstar Strahinja Stojacic lived up to top billing with an insane 11 points and 11 highlights in a solo act against Ulaanbaatar MMC Energy (MGL) in a tough semi-final.

It meant Ub had a rematch against Antwerp, who ended their remarkable winning run in the final of the Debrecen Masters. It wasn't easy with OT needed to separate them, but Ub eventually prevailed to kick-start their end of season launch in style.

Having been outplayed by a few rivals recently, including to his brother Stefan Stojacic in Paris, Stojacic was unstoppable once again to walk away with the MVP after winning most of the main stat categories, including a ridiculous 37 highlights.

Ub, again, find themselves in the familiar position of celebrating a title.

The Belgians have been inconsistent since their breakthrough win in Debrecen, but believed they stumbled on a successful formula after finishing runner-up in Cebu.

The springy Dennis Donkor showed glimpses of his potential in Cebu but went up a level with a sensational performance in Tainan City to further Antwerp's already impressive firepower.

They made another deep run even though superstar Thibaut Vervoort couldn't quite get his radar going in a rare off tournament for one of 3x3's best although he still produced some sick highlights.

Antwerp were really made to work in the knockout stages, starting with getting past Belgrade Partizan (SRB) in a tense quarter-final before blunting lethal Lithuanians Sakiai Gulbele (LTU) in the semis.

They fell short to Ub in another classic final, but the Belgians booked a ticket to Hong Kong in what will be an important tune up for the season finale in Abu Dhabi.

Dangerous Donkor: The 6ft. 4in (1.94m) Donkor has fitted in like a glove to Antwerp's star-studded line-up and the two-way monster is getting better every game.

His versatility makes him able to guard almost anyone, while he picked up more of the scoring slack with Vervoort firing blanks. His impressive tournament ended on a sour note when he suffered a leg injury early in the final against Ub, but hopefully it's just a minor setback

Donkor finished fourth in overall scoring, including an eye-catching 47% from 2, to unleash his nasty offensive game in a scary sign for opponents as he starts getting comfortable on the half-court.

There was much hype for a clash between two of 3x3's best with the rivalry having gone into overdrive in Debrecen.

Antwerp's confidence was underlined by a fast 5-0 start with Nick Celis aka 'Clerk Kent' putting the cape on with 3 early points. But Ub woke up with Stojacic nailing an open 2 as they clawed back into the contest to level up.

While his teammates were ice cold, as they suffered the big loss of Donkor being sidelined for most of the game with a leg injury, Celis had the hot hand to go bang, bang but again Antwerp couldn't pull away.

Trailing by one with just seconds left. Vervoort flipped the switch with an incredible pump fake and then drove for a spectacular lay up to level the scores.

OT was needed to determine the champs and up stepped Dejan Majstorovic, who proved he was 'the Maestro' in the clutch with an unbelievable contested two off the glass to win Ub the title.

After ending their mini-slump in style, Ub are back with that familiar swagger.

The reward: Two tickets to the Hong Kong Masters

Ub and Antwerp became the first teams to qualify for the first-ever Hong Kong Masters on November 26-27, 2022.

Key Stats:
- The top four seeds made the semis and the top eight seeds made the quarters, while the four teams who were bounced in pool play were winless.
- Ulaanbaatar MMC Energy may have fallen short of a breakthrough title, but Steve Sir was a flame thrower in Tainan City with 36 points in 4 games. His masterpiece was a triple-five of 12 points, 7 rebounds and 5 highlights against Belgrade Partizan in pool play.
- The longest game of the tournament was the epic final between Ub and Antwerp which went into OT and lasted 10'27" overall.