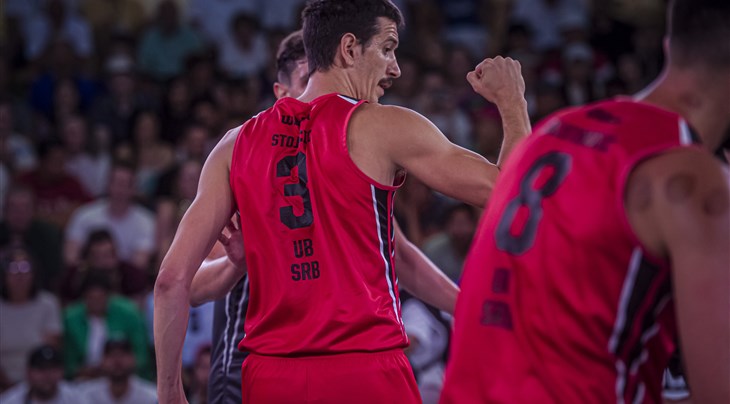 After winning their third straight Masters of the season in Prague, Ub again enter as No.1 seed and the red hot favorite having won 14 straight games on the World Tour. Living up to their swagger, Ub have stated they want to overtake Novi Sad's historic 32-game winning streak in 2018.

But they firstly have to get through a tricky Pool A against defending champs San Juan, who memorably upset Ub in the final of the Lausanne Masters 2021.

The Puerto Ricans boast stars Gilberto Clavell and Angel Matias from that memorable triumph 12 months ago, but Ub won't be threatened because top-ranked player Strahinja Stojacic is in heat check mode after bagging his second MVP award of the season in Prague.

Rounding out a tough group are host Lausanne Sport (SUI), who always love playing in front of the home fans and their familiar stars will be out to light up the Olympic capital.

No.2 seed Liman Huishan NE (SRB) headline Pool B and are desperate to break their Masters drought this season. The Serbs have been unstoppable in Challengers with four straight titles and 20 - 20! - straight wins but that form has not translated into success on the big stage.

Liman fell at the quarters twice either side of a runner-up finish in Manila, but have their A-Team in Lausanne. Big fella Aleksandar Ratkov has somehow taken his game up a level with three MVPs in the Challengers and you would be brave to bet against him adding another here.

Pool B also features two teams seemingly going in different directions. Jeddah (KSA), whose much-hyped team have struggled so far this season, and emerging Dusseldorf LFDY (GER) appear set to fight for the remaining spot in this group.

There is always one and Pool C just has to be our tip for the 'Group of Death'. No.3 seed Antwep (BEL) haven't had the second year blues, so forget about Better Call Saul because Thibaut Vervoort remains the hottest show on TV.

'Must See TV' has been sizzling in 2022 and helped Antwerp win silverware in Challengers but they are still seeking a first ever Masters title. They will have an extra point to prove after a Day 1 flop in Manila but the Belgians won't have it easy in Lausanne.

They face Ulaanbaatar MMC Energy (MGL) in a contest set to have more action than Bullet Train. The Mongolians have been up and down this season, but racked up the travel points because these dudes have been playing everywhere this season.

They need to be battle tested to get out of this group, which also features in-form Belgrade Partizan (SRB) who shocked the world with a runner-up finish in Prague. Ivan Popovic will be out to prove he's one of the best in the business after making a statement in Prague with a lights out display.

Pool D is highlighted by a mouth-watering clash between Amsterdam HiPro (NED) and Sakiai Gulbele (LTU). The Dutchmen have not been seen in Masters since a semi-final finish at the Utsunomiya Opener and it's another chance to watch Dimeo van der Horst play air guitar after a big shot.

It's been a year for hoops power Lithuania to make a stand in international 3x3 competitions, but it hasn't quite translated to success for Sakiai on the World Tour. But we know the talent is there with Aurelijus Pukelis and FIBA 3x3 World Cup 2022 silver medalist Marijus Uzupis capable of being the deadliest duo around.

The third team in Pool D will come from qualification as the World Tour is set to explode in one of its favorite destinations.