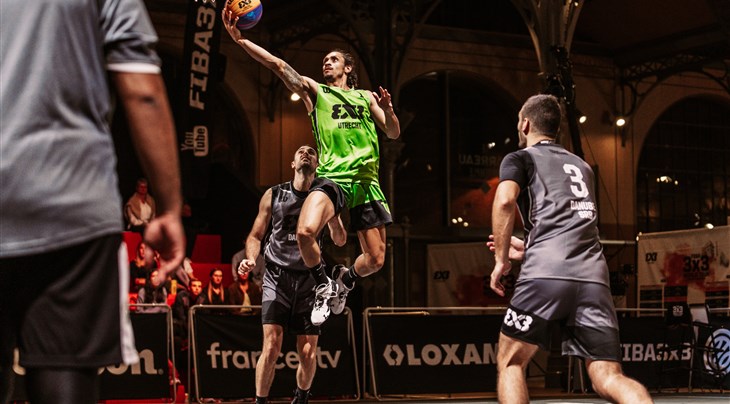 3x3 fans were familiar with Amsterdam HiPRO, well there's a new Dutch team in town. Utrecht started the day in the gorgeous settings of Carreau du Temple with a big upset over the number one team in the world Ub Huishan NE (SRB), 18-17. They closed the day with a stunning comeback win in overtime against Danube (SRB), 18-16. We could go on and on about Worthy de Jong's heroics in this game but let me save some for the player-of-the-day section.

Where do we start? Worthy de Jong led all players in points (23) and rebounds (14), There had been only 18 triple-fives on the entire World Tour this season. The 34-year-old Dutch star - who shined at FIBA EuroBasket last month - had 2 on the same day. The silky smooth De Jong had a jaw-dropping 14 points, 6 rebounds and 6 highlights against the best team in the world Ub in their opener.

He casually followed up with a 9-point, 8-rebound, 8-highlight triple-five in the OT win against Danube. Oh and he scored 2 clutch Maurice Lacroix buzzer-beaters in the game: a big corner 2 to send the game to overtime and a gritty iso to call game in OT.

Worthy de Jong had his own personal Top 10 video clip, but we got a lot of contributors on Day 1. World Tour 2019 regular season MVP Disco Domo Jones sent us a little refresher that he still has some of the best handles on the World Tour. Team Prebold (SLO) can confirm.

Doha QSC (QAT) star Dejan Janjic definitely caught our eye on Day 1, leading all players in key assists (7), highlights (14) and player value (26.7). Statistically speaking, he had the best game of the day (15.3) when he dropped 13 points and 8 highlights on Princeton (USA). He followed up with a triple-five of his own in the buzzer-beating loss against Jeddah (KSA) (9 points, 7 rebounds, 6 highlights)

In this game. Darius Tarvydas (Jeddah, KSA) had the only other Maurice Lacroix buzzer-beater of the day (besides Worthy de Jong's).

Vienna (AUT) were the best offense (only team to score 22 points in both games) and best defense (15 points conceded) on Day 1. Their sharpshooter Stefan Stojacic ranked second in scoring with 18 points.