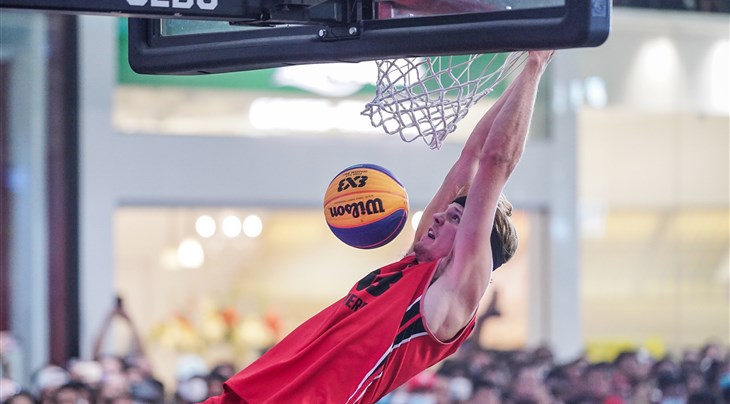 MIES (Switzerland) - As the end of this crazy 2022 pro season approaches, the race is heating up to see which star comes out on top in player value.

It's not just bragging rights on the line, there is also financial incentive with the winner of the top player value from the entire pro circuit (FIBA 3x3 World Tour and Challengers) to receive $10,000, second place to get $7000 and $5000 is on offer for third.

For those who don't know, player value (P-VAL) is a metric measuring a player's overall statistical contribution.

It is calculated with the following formula: (S-EFF * PTS) + KAS + DRV + DNK + BS + BZR + (REB/2) - TO. If that's a math equation that feels like it's out of A Beautiful Mind then here it is in a nutshell: shooting value, highlights and half of rebounds are summed up and then turnovers are deducted.

So let's look at the leaders with just two Masters and one Challenger left in the season before the Abu Dhabi Final in December.

Proving that he really is 'Must See TV, Vervoort has had a brilliant second season on the pro circuit, going from the hottest rookie in the game to a true superstar.

He currently sits on top of player value having led Antwerp to four titles this season, including a MVP performance in their breakthrough triumph at the Debrecen Masters.

It all means that Vervoort is an absolutely complete 3x3 player who appears to be created out of a lab. It's why you can't change the channel every time he's on tv.

The Serbian sniper remains one of the best in the business being part of five of Liman's six title winning teams, including winning MVP at the Utrecht Masters. He's second in points (279), key assists (69) and Maurice Lacroix buzzer beaters (2).

Remaining one of the best shooters in the game, Kojic has again been lights out and is equal second in 2 point percentage (35%) for those who had more than 100 shots from beyond the arc.

He's perhaps easily overshadowed by flashier players, but Stefan Kojic has no flaw and he'll be eyeing top spot with a strong finish.

The eye test shows that the big fella has made the leap this season and the numbers confirm this. The 30-year-old has gone from a very good player to a superstar having been a valuable part of all six of Liman's titles, including winning a trio of Challenger MVPs.

Ratkov has been an iron man this season, playing the most games on the pro circuit and he's been especially a beast on the glass with a mammoth 242 rebounds - 43 more than second-placed Nick Celis.

He's around the top 10 in most other major categories to underline Ratkov's rise into 3x3 stardom in a nice recognition for a player who sometimes went under radar but who is a flat out winner and key to Liman's long-time success.

The race is congested underneath the clubhouse leaders. Here are the next five in line who will be doing all they can to get into the top three by season's end.