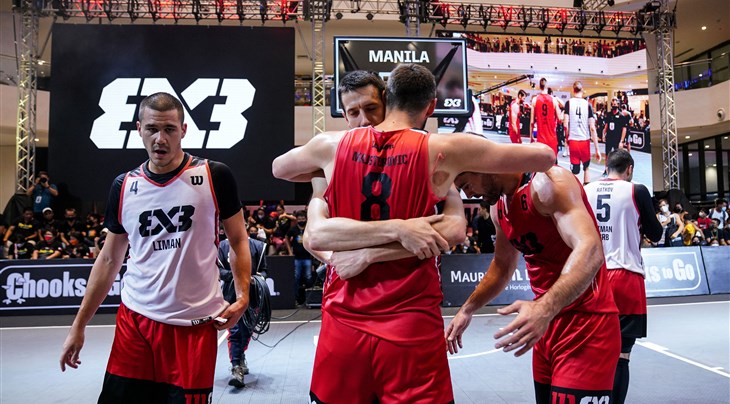 MANILA (Philippines) - The calendar has flipped over to June and that means we're just weeks away from FIBA 3x3's biggest national team competition of the year - the World Cup in Antwerp on June 21-26.

With the showpiece event, returning after a three-year absence, about to take center stage, let's check in on some teams in the aftermath of a thrilling Manila Masters.

Serbia are looking hard to beat

Serbia's quest for a record fifth World Cup is looking pretty good right now. Their two teams in Manila - Ub and Liman - went all the way and met in a blockbuster final, where Ub made it back-to-back Masters to start 2022 with a convincing W.

MVP Dejan Majstorovic enjoyed the indoor conditions at the fancy Ayala Mall with an MVP performance and the Olympic bronze medalist (if selected) may enter the World Cup looking like the 'Maestro's prime with Novi Sad.

Had Liman triumphed, Stefan Kojic surely would have won MVP after a lights out performance and (again, if selected) may form the Splash Bros along with the 'Maestro' in Antwerp.

It wasn't quite all good news, however, with world No.1 Strahinja Stojacic struggling with a leg injury but there is still time for him to get back to full fitness.

And with a pool of talent to choose from, including Olympic bronze medalists Mihailo Vasic and Aleksandar Ratkov, Serbia has plenty of firepower to deservedly start the World Cup as favorites. Belgium's star had the plug pulled out

After such a heroic effort to make the semis at the Utsunomiya Opener without a sub, No 2 seed Antwerp crashed back to earth with a stunning Day 1 exit - ending a streak of seven straight knockout appearances on the World Tour for the Belgians.

It was hard to believe with Antwerp crashing out after a humbling 21-13 loss to Sansar MMC Energy. Perhaps most surprising was the struggles of Thibaut Vervoort aka 'Must See TV' whose latest show flopped and he was colder than swiping left after shooting just 3 for 16 from deep.

But maybe they can be forgiven after seemingly looking out of sync with the addition of newcomer Caspar Augustijnen, who struggled on the big stage but he needs to be cut some slack having just recovered from illness recently.

One suspects they'll learn from this disappointment. Zamojski is the real deal

There was a lot of hype for Warsaw Lotto ahead of Manila and it was a mixed bag for them. They were easily beaten by Liman in the pool stage but recovered in a must-win game to take down Gurugram 3ball before losing a quarter-final thriller to eventual champ Ub.

They may well face Serbia and/or Mongolia at some point in Antwerp, so they were important tests for the Poles making their World Tour debut this season in a year where much is expected of them.

They can be encouraged by star Przemyslaw Zamojski, who averaged a leading 8.3ppg even though he carried a leg injury into the event.

He struggled from deep shooting just 25% but if he's fit and firing in Antwerp then the Poles can dream of at least matching their bronze medal from FIBA 3x3 World Cup 2019. Get excited about Mongolia's new superstar

With four teams in the draw, it appeared the Manila Masters might be a Mongolian invasion, especially after their top team Ulaanbaatar MMC Energy starred on Day 1.

But it didn't quite materialize with Ulaanbaatar surprisingly beaten by newcomers Melbourne in the quarters and their hopes rested on Sansar MMC Energy, who went one step further before falling to Liman.

The most encouraging performance came from dynamic Anand Ariunbold, who finished third in overall scoring with 30 points from 4 games with most of his buckets coming from ridiculous shots from deep.

This 25-year-old is a flat out bucket getter and might just be the best player in Asia. Jump on the bandwagon before it's too full! He surely made his case to be in Mongolia's team at the World Cup.

Ariunbold outplayed fellow young gun Gan-Erdene Gantsolmon, who still produced some insane moves but was hampered by a foot injury in a concern for Mongolia.

Japanese team Yokohama Beefman and Auckland from New Zealand would have been hoping to get a good hit out in Manila but failed to do so as they couldn't get out of qualifying.

The Japanese really struggled in two losses in a major concern ahead of the World Cup, but the 3x3 Tall Blacks at least enjoyed a comfortable over Yokohama to leave Manila with some confidence.

And in a further boost, sharpshooter Chris McIntosh proved he was a bullseye from deep after winning the shoot out contest. Memo to opponents - don't leave this sniper open!