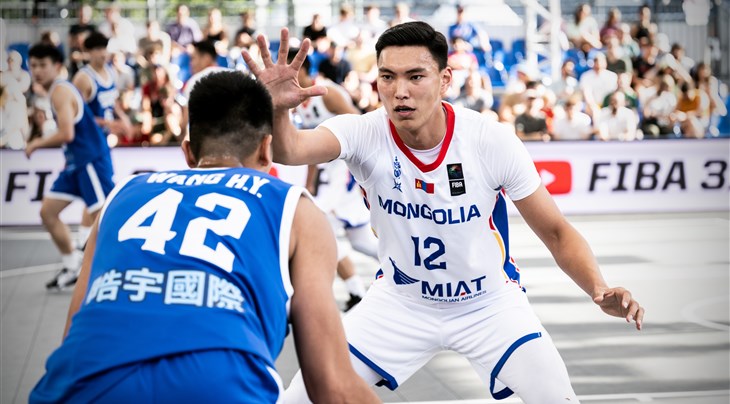 SINGAPORE - There will be 53 men's and women's teams dreaming of glory at FIBA 3x3 Asia Cup 2022 but only two of them will stand victorious at the end of the five-day marathon.

Let's look at the main contenders.

Mongolia are the No.1 seed and it's a lofty title they deserve. It very much feels like at any moment that Mongolia are going to take 3x3 by storm having built the infrastructure and become professional.

They probably have the best player in Singapore through walking bucket Anand Ariunbold. Or is it Delgernyam Davaasambuu, who will break the thermometer in Singapore if he heats up?

Mongolia have a wealth of talent which has been evident with their teams having gone up a level on the pro circuit. And they've picked their best to represent them on the international level as Mongolia performed solidly at the recent Crelan FIBA 3x3 World Cup 2022 only to fall short in the play-in to the quarter-finals to Poland.

Opponents should fear because Mongolia are out to make a statement in Singapore that they are now the best in Asia.

The man mountain proved he is still 3x3's Thor with a bulldozing performance to inspire new kids on the block Melbourne to a semi-final run at the Manila Masters, where they knocked out Mongolia's best team Ulaanbaatar MMC Energy.

Hire is surrounded by talent , including his best friend Jesse Wagstaff who proved he is the perfect wingman with an eye-catching debut in Manila, and sharpshooter Andrew Steel, who won the event in 2018.

They clearly have the goods for a three-peat. The No.2 seed will have to do it the hard way through qualification but don't write off Japan, who won bronze in 2018.

Especially when they have Mr Human Highlight Tomoya Ochiai aka 'Worm' who will be carrying his team in Singapore.

If he can find that old magic - where this lethal lefty has been fooling opponents for years - then Japan might just be able to go all the way from qualification.

Japan were winless in Antwerp but improved after every game to suggest they might just feel good heading into Singapore.

China just have to start favorite after winning bronze at the World Cup.

And they will be extra determined having never gone all the way - in women's or men's - at the Asia Cup, which might explain why their two stars Lili Wang and ZhiTang Zhang are lacing up despite their weariness after Antwerp.

Wang absolutely deserves the No.23 reserved for GOATs as she is a flat out assassin on the half court even though she is a modest 5ft. 9in (1.75m). At the other end of the spectrum is Zhang, the 6ft. 5in (1.95m) enforcer in the middle who can score whenever she so pleases.

With arguably the two best players in the event, it's little wonder China are the women's favorites.

The No.1 seed have been building for this moment for a while. They created history at the Tokyo Games when they became Mongolia's first ever team to make an Olympics in any discipline and they recently made the Last 16 in Antwerp.

The natural progression would be to make a statement in Singapore and end a barren run at the Asia Cup, where they haven't won a medal at the last three events.

This looks like a golden opportunity to end that curse with a team full of familiar faces led by young star Khulan Onolbaatar who can absolutely be the best player in the competition if she shrugs off a form slump.

Talented 21-year-old Ariuntsetseg Bat-Erdene picked up the slack in Antwerp with an impressive display and can form a devastating tandem with Onolbaatar.

It will be interesting to see how Mongolia cope with the expectations from their crazy 3x3 fans. Japan only had one victory at the World Cup - albeit a memorable W over foe China - but they were pretty competitive in a tough Pool A.

While they'll be lacking a couple of big names, No.3 seed Japan do bring back Moe Nagata and Tamami Nakada who will be expected to lead a deep Japan run.

With defending champs Australia, who have been absent since the Covid-19 pandemic, bringing a team full of fresh faces to Singapore, Japan should feel absolutely in the title mix.